OhioVarsity.comThe best play here!
More
HomeHornets air it out in 44-0 win over Spartans 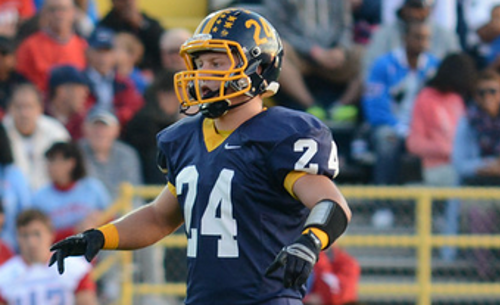 Hornets air it out in 44-0 win over Spartans

The Kirtland Hornets have made a living running the football and chewing up the clock. That strategy guided the team to four straight state championship game appearances.

But, the Hornets can throw it if they need to.

That’s what happened in Friday’s 44-0 win over Richmond Heights when the Spartans sold out to stop the run. Kirtland quarterback Owen Lewis threw two touchdown passes to Evan Madden and one to David Allchin to give the Hornets a 22-0 lead at halftime.

“Richmond Heights is a good football team with some great athletes, but during the game we saw they were playing the run very aggressively and coach called all the right plays at the right times,” Lewis said.

By capitalizing on the Spartans’ aggressiveness on defense, Kirtland was able to open up the running game. Ten different Hornets combined to carry the football 47 times for 232 yards.

Joey Bates led Kirtland with 60 yards on seven carries and Allchin had 55 yards on 11 carries.

“The line did a fantastic job all night and gave me plenty of time,” Lewis said. “And David and Evan did a great job getting open.”

Sanjay Sundararajan was 3 for 3 on extra point attempts and booted a 37-yard field goal for the Hornets.