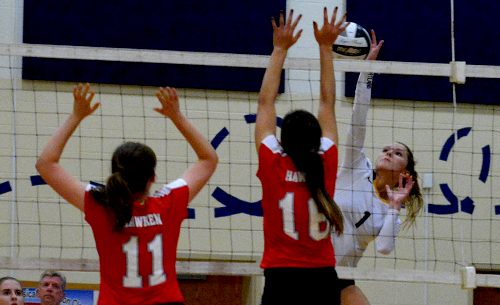 KIRTLAND—A loss at Hawken in their conference opener back on Aug. 27 didn’t sit well with the Kirtland Hornets.

Led by Sam Bailey, the Hornets turned the table on the Hawks and won by an identical 3-1 score.

“The girls had a tremendous practice (on Wednesday),” said Kirtland coach Bob Schenosky. “They worked incredibly hard in all the things we needed to do and a lot of that was what we saw today. They were digging stuff up on the sides, doing a great job. We were moving our block around. Our hitting was terrific and we had good back row play. We’ve worked hard on that and our passing is getting better.”

Hawken jumped out to an 11-5 lead in the fourth set before the Hornets rallied to win.

“The kids are in great condition and I think that’s an important part of it when you’re going four or five games, because sometimes when you’re out of condition you’re making mental mistakes,” Schenosky said. “We didn’t see much of that today. In the second and third game we had some tough serving issues. We came back in the fourth game and I don’t think we missed a serve.”

Bailey led the Hornets with 13 kills and also had five blocks.

She believes the Hornets played more as a team in the second match against the Hawks.

“I think this time we really worked together,” she said. “Everybody hustled. Not a single ball hit the floor without a body. It’s awesome. We wanted this really badly.”

Olivia Mancisio had eight kills and a team-high seven blocks.

“Olivia has been a stalwart for us at the net,” Schenosky said. “She has been a tremendous blocker. Her kill ratio is very high. Both her and Sam Bailey, we’re seeing numbers like we saw with Maddie Crawford last year. I’m excited about both of them. I think we have tremendous middles on our team.”

“I thought Julia Ricketti did a terrific job,” Schenosky said. “She dug up some very hard balls at the net and even though they picked up a lot of her hits everything was going down. They played some great defense. I have to give Hawken credit. They dug up a lot of balls that other teams don’t. They’re very well coached and disciplined on their side of the net.”

Kirtland travels to Newbury on Wednesday.