OhioVarsity.comThe best play here!
More
HomeHornets back to .500 after win at Richmond Heights 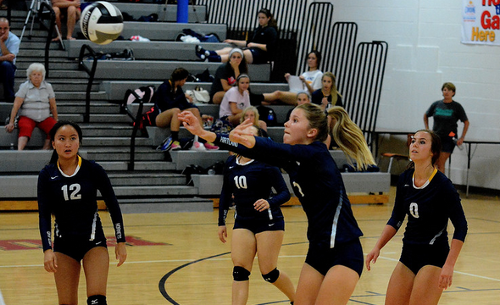 Hornets back to .500 after win at Richmond Heights

Kirtland’s volleyball team got off to a slow start this season, having lost four of its first five games. After a 3-1 win at Richmond Heights on Thursday the Hornets are 4-4 overall and 2-2 in Chagrin Valley Conference action.

“I'm proud of the way the girls played tonight,” said Kirtland coach Bob Schenosky. “They hustled and never gave up. Rich Heights was a tough team with some great athletes.”

Olivia Mancisio led the Hornets with 14 kills and also pitched in with four blocks. Sam Bailey contributed with 12 kills and five blocks.

“Sam Bailey and Olivia Mancisio led us at the net tonight and our setters, Lydia Shiffler and Emily Nerderman did a great job setting them up,” Schenosky said.

Mancisio got into her groove early in the game and Schenosky made sure his setters fed her at the net.

“Coach knew that I was on top of my game so he kind of told setters to set me,” she said. “There were some tough passes for them but they set the outside and the right side so they could get some too, but every chance I got to hit the ball I took it.”

As one of the team’s seniors, Mancisio does her best to lead by example. It wasn’t always easy, especially during the four-game skid, but she sees the team improving on a daily basis.

“We kind of got down at the beginning,” she said. “We realized how the other team had played and we played above them. We were very focused and put a lot of effort into it.”