Hornets claw out win over Tigers 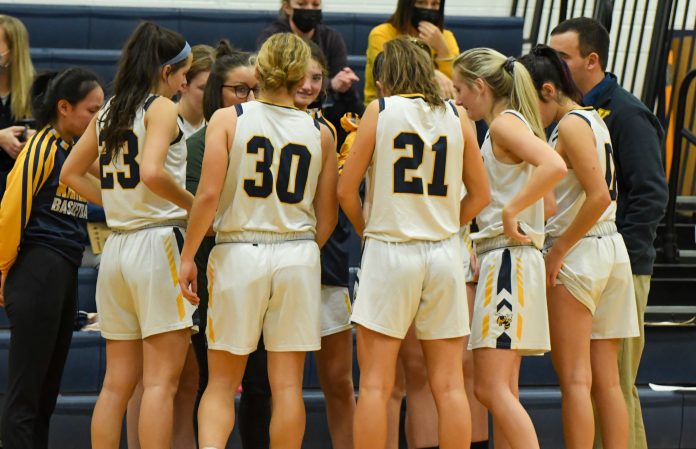 Kirtland bounced back from its first loss by clawing out a 33-28 win at Chagrin Falls on Monday.

The Hornets, who lost at Kenston, 50-44, on Saturday, relied on a stingy defense to pull away from the Tigers in the second half.

“Saturday was a tough loss but we needed to move forward,” said Kirtland coach Brittany Zele. “We have three games this week against solid, talented squads, so we knew this game was going to set the tone for this week of games. Beating Chagrin is a huge victory for us mentally.”

Chagrin Falls’ Peyton Gellin scored four of her team-high 10 points in the first quarter as the Tigers jumped out to a 7-5 lead.

Kirtland’s Reilly Greenlee heated up in the second quarter as she scored four points as the Hornets tied the game at halftime, 14-14.

Greenlee scored eight of Kirtland’s 10 third-quarter points to give the Hornets a 24-21 lead and the momentum heading into the fourth quarter. She finished with a game-high 12 points.

The Hornets outscored the Tigers in the third quarter, 10-7.

“Third quarter wins games is what I always tell the girls,” Zele said. “We needed the energy and the excitement from the bench and on the court. They delivered.”

Emily Ridgeway drained a big 3-pointer in the fourth quarter and Macy McIntosh added a bucket. The Hornets also drained four free throws in the final eight minutes to seal their win.

Rosson and Corinne Greenlee both finished with six points, McIntosh added five, Ridgeway finished with three, and Marissa Carmosino contributed with one.

“We were relentless,” Zele said. “Offensively, we had great ball movement but shots weren’t falling so our defense carried us through. We had some huge shots in the fourth quarter from Emily and Macy, then Corrine and Alex. Macy hit some free throws when Chagrin had to foul.”

With the win, Kirtland improved to 7-1 on the year while Chagrin Falls dropped to 8-4.