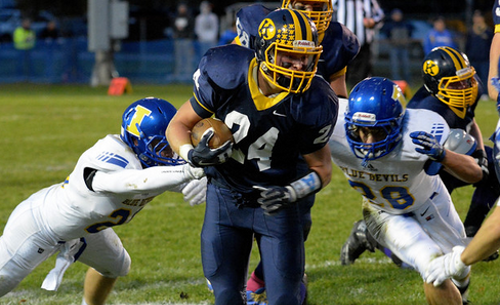 KIRTLAND—The Kirtland Hornets got off to a fast start in Friday’s Chagrin Valley Conference showdown with Independence.

The Hornets scored four first quarter touchdowns and cruised to a 48-3 win over the Blue Devils.

“Obviously, we’re trying to improve every week and every day,” said Kirtland coach Tiger LaVerde. “There were things we could have improved on and that’s kind of what we’re looking for right now. We just want to try to play hard and compete every day.”

After being forced to punt on the opening possession of the game, the Hornets scored on their next four to lead 28-0 after the first quarter.

Joey Bates scored the first of his two touchdowns on a 1-yard run with 4:15 to play in the first. Joey Torok added a 3-yard run a minute later and David Allchin broke a 55-yarder on the first play of Kirtland’s fourth possession. Owen Lewis closed out the quarter with a 3-yard scoring run. Sanjay Sundararajan booted all four extra points.

Bates added a 20-yard scoring run in the second quarter and Jake Knox punched it in from the 1 to give the Hornets a 41-0 lead before Independence’s Evan Collins booted a 44-yard field goal as time expired in the half.

Gaige Ward closed out the scoring for the Hornets with a 1-yard run in the third quarter.

Bates led the Hornets with 207 rushing yards on 18 carries.

“For us to move forward and become a really good football team we need Joey Bates to be healthy and running hard,” LaVerde said. “He’s getting healthy. He looked good in Week 1 against Chagrin Falls with 196 yards then he got dinged up and battled some injuries. This is the best he’s looked in a few weeks.”

Kirtland improved to 5-1 overall and 3-0 in the Chagrin Valley Conference. The Hornets travel to Cardinal on Friday.

“We’re 100-percent focused on trying to make our kids better each and every day,” LaVerde said.

Independence, who dropped to 2-4, hosts Hawken on Friday.