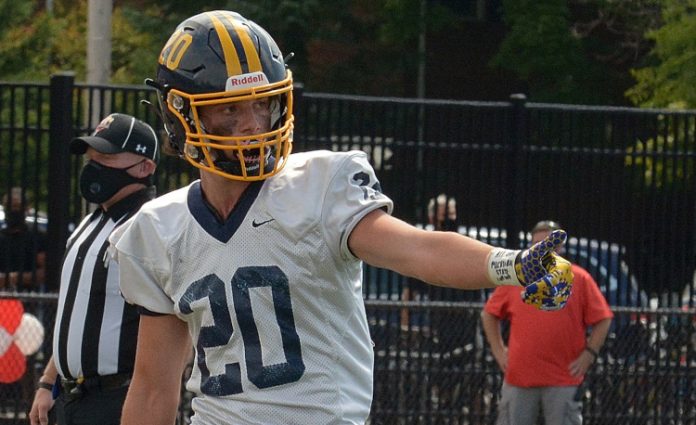 Kirtland was up to its usual tricks on Friday in a 47-0 win at Lutheran West.

The Hornets amassed 420 yards of offense while allowing just 43 to the Longhorns and had five different players score touchdowns in collecting their 43rd straight win.

Even more impressive, Lutheran West racked up 30 yards of offense on its first drive, which chewed up the first seven minutes of the game clock.

“They were moving the ball on our defense a bit,” said Kirtland junior Tommy Gogolin. “That running back they had was very physical, but once our guys started to listen to coach and execute then everyone just started making plays.”

Lutheran West running back Eddie Lewis racked up 29 of his team-high 39 yards on that opening drive, which stalled at the Kirtland 35.

One play later, Mason Rus ran 65 yards for a touchdown and the rout was on.

Ramon Lescano threw a 24-yard touchdown to Gage Sullivan late in the first quarter to push the Hornet lead to 13-0 after one period.

Rus added a five-yard TD run early in the second quarter and Gogolin scored on runs of 12 and seven yards as the Hornets increased their lead to 33-0 with 1:51 left in the half.

Daven Patel then recovered a fumble at the Lutheran West 32 and Sullivan scored one play later.

Rocco Alfieri closed out the Kirtland scoring with a five-yard touchdown run late in the third quarter.

Rus led the Hornets with 107 rushing yards on eight carries. Gogolin added 61 yards on seven rushes. Both scored a pair of TDs.

“The amazing offensive line play led to those TDs and high averages,” Gogolin said. “Every night, those guys work hard, and if I can make a few guys miss and score it’s even better.”

Gino Blasini rushed six times for 49 yards and Sullivan finished the night with 32 rushing yards and three catches for 61 yards with two touchdowns.

The Hornets, who travel to Pittsburgh on Friday for a Week 3 contest against Westinghouse, improved to 2-0 and haven’t lost a game since Dec. 2, 2017. Kirtland moved up to seventh in OHSAA history with 43 consecutive wins. Delphos St. John leads the OHSAA with 57 consecutive wins from 1996-2001.

Despite their success, the Hornets remained grounded and focused on one play and one game at a time.

“It’s very important to not get too overly confident,” Gogolin said. “Most of us try to bring each other back down to earth and it’s still too early. It’s only Week 2 of a long season and we as a team are trying to win it all again.”