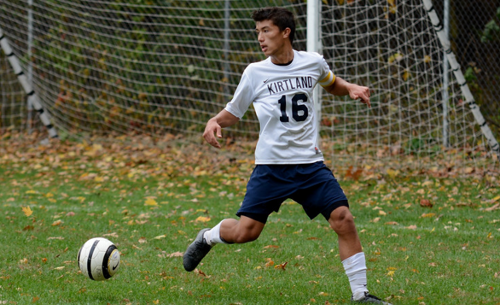 Kirtland senior Bradley Hauptman scored three goals to lead the Hornets to a 6-1 win over visiting Wickliffe in a Division III district semifinal on Tuesday.

Hauptman scored on a penalty kick in the fifth minute and Jordan Ianiro scored a minute later off a Hauptman assist to give the Hornets an early 2-0 lead.

“We scored two goals in the first 10 minutes,” said Kirtland coach John Valentic. “We weren’t playing that great. We were kind of sloppy, but we got one with a PK and before you knew it it was 4-0 and the game was pretty much in hand.”

Hauptman’s penalty kick was set up when Stjepan Mijic-Barisic was taken down in the box.

Kyle Work scored off a Mijic-Barisic assist in the 17th minute to make it 3-0 and Hauptman finished off a pass from Work a minute later to make it 4-0.

Wickliffe scored on a penalty kick—but just barely as Kirtland keeper Danny Jahnke got a hand on the ball—with just over nine minutes to play in the first half.

Hauptman’s third goal made it 5-1 at the break.

“Once the game got going we started playing much better and smoother and cleaner,” Valentic said.

Mijic-Barisic scored in the second half and Jahnke finished the game with three saves.

Kirtland improved to 14-4 overall and will play Beachwood at West Geauga in the University Heights District championship game. It’s the third straight appearance for the Hornets in the district finals and the second straight against the Bison.

Kirtland also played in the district final in 2002.

“A lot of kids returned from last year and have a taste of the district final, and this is actually their third trip in a row, so there could be some kids that obviously have been on the team for a while and remember that,” Valentic said of the Hornets’ approach to facing Beachwood again. “They knew Beachwood was going to be the challenge and it will not be easy. It will be interesting to see both teams play on turf so we’ll see how that goes. The key is just everyone being focused and having belief. Why not us?”

Kirtland beat Beachwood, 2-1, at Recreation Park on Sept. 21. The Bison were ranked No. 2 in the state at the time.