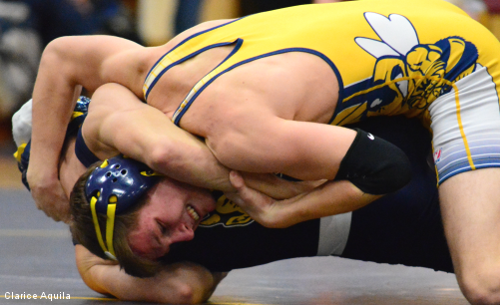 The regular season is the time for wrestlers to discover their weaknesses and turn them into strengths. That was Kirtland’s strategy in practice this week and apparently it worked.

The Hornets defeated Jefferson, 49-14, and Wickliffe, 67-0, on Thursday to improve their dual record to 8-4 overall. Kirtland won 13 of the 16 individual matches wrestled in the two duals.

“Coming into practice this week we had some stuff we wanted to fix,” said Kirtland coach Scott Francis. “We worked on it in practice and watching it tonight it looked like the kids were making adjustments. I think it showed up out there.”

Williamson received a forfeit against Jefferson then beat Wickliffe’s Jake Buttari, 17-4, at 106 pounds.

“I guess that (Wickliffe) kid has been having a pretty good season so it’s always good to see yourself get a good win like that,” Coach Francis said. “He’s been wrestling like that all year.”

Jahnke received a pair of forfeits at 120 pounds followed by Andonian, who recorded two pins at 126. He needed just 14 seconds to record the first against Jefferson then took 2 minutes, 34 seconds to pin his Wickliffe opponent.

“I’d like to see him maybe stay out there a little longer, “Francis said. “He’s going out there very aggressive. Sometimes he comes out too aggressive and makes mistakes. We’re just working to get rid of those mistakes.”

Evan Francis also recorded a pair of pins. He pinned Jefferson’s Clay Smock in 2 minutes, 27 seconds at 145 then stuck Wickliffe’s Patrick Bonano in 1:09 at 138.

“He came out and wrestled well,” Coach Francis said. “He had two good matches.”

Brown beat Jefferson’s Christian Saunders, 5-0, at 152 then received a forfeit against Wickliffe at 145 pounds.

“He’s in the process of fixing his mistakes and trying to wrestle a good match as opposed to just winning,” Francis said. “The win was great but he wrestled a great match and that’s what we’re happy about.”

Sakenes continues his impressive season on the mat after a several year layoff. He pinned Jefferson’s Mason Swiney in 53 seconds at 160 then received a forfeit against Wickliffe at 152.

“He’s been a kid who hasn’t wrestled for a few years, comes out this year and he’s having a great season right now,” Francis said. “I think he’s at 16 wins already.”

Davidson remained undefeated on the year with a 10-2 win over Jefferson’s Zach Collins at 170 and a forfeit against Wickliffe at 160.

“In that 10-2 match, we bumped him up. That’s another one of Jefferson’s kids that came up through the youth programs. He knows how to wrestle and has real, real strong hips,” Francis said. “Those are probably the strongest hips Clayton has seen all year. It was nice to see Clayton have to make some adjustments to win that match and that’s exactly what he did. When your No. 1 move isn’t working what are you going to and that’s what he was able to do to win that.”

Porter was 2-0 at 195 and in what has become his own style he did it in dramatic fashion. His pin while trailing at the Disney Duals gave the Hornets the tournament championship. In his 5 minute, 16 second pin against Wickliffe’s Alan Haavisto he again had to fight off his back and come from behind for the thrilling pin.

“That’s what Porter did down at Disney,” Francis said. “He was losing the match and almost got pinned. He came back and won and pinned the kid. At Disney the pin was to win the match and the tournament so it was real exciting but for us it was like déjà vu.”

Diemer stuck both of his opponents at 285 pounds. He pinned Jefferson’s Bubba Hagerdon in 1 minute, 45 seconds and Wickliffe’s Patrick Sheridan in 3:21. Sheridan caught Diemer on his back but the Kirtland heavyweight countered and finished off the match.

“He made a mistake in there and he knows what it was and he won’t make it again hopefully,” Francis said. “That’s the thing about wrestling. You make one mistake and that can be the match for you. He got lucky and was able to come out and fight off that headlock. He was able to fight out of it and got back on top. That’s the great thing, he didn’t give up.”

Petterson dropped a 4-2 decision to Jefferson’s Joshua Baitt then received a forfeit against Wickliffe. Mormino bumped up to 138 against Jefferson and was pinned by Austin Simmons. He then dropped to 132 and beat Wickliffe’s Jordin Sidhu, 11-7. Mormino battled back from an early deficit to win that match.

Kirtland gets right back on the mat on Friday when the Hornets travel to Cardinal for a double dual with the host Huskies as well as Independence and Harvey.