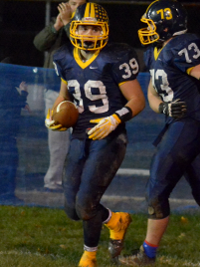 All those Division VI football teams who thought Kirtland’s football team might be vulnerable after graduating a stellar senior class that accounted for two state titles and three straight championship game appearances have to rethink their strategy.

The Hornets opened the 2014 season on Friday with a dominating 49-14 win over visiting Eastlake North, a Division II school.

“I thought our defense played really well,” said Kirtland head coach Tiger LaVerde. “They had two yards of offense at halftime. I thought we competed well. The young kids that haven’t had the chance to play did a nice job. They looked forward to their chance. It was a good way to start the year.”

In typical Kirtland fashion, the Hornets jumped on the Rangers early and never gave the visitors the chance to climb back into the game.

Now that Sam Kukura has graduated, Adam Hess has a new backfield mate in Jacob Boyd but the results were similar.

The two combined to carry the ball 35 times for 288 yards and four touchdowns.

“Adam Hess did his thing,” LaVerde said. “He ran the ball well between the tackles and Jacob has good speed. “He’s our home run threat. He broke a couple long ones. (Quarterback) Sam Skiljan also had a couple big runs. He broke one and he also got the ball to (tight end) Matthew Finkler. (Finkler) is a quite a weapon. I like our skill guys.”

Kirtland led 29-0 at halftime and put the game in the hands of its defense and younger players.

North ended the game with just 40 yards rushing and 113 through the air.

“We have a great defense,” LaVerde said. “Hopefully we’re good on special teams and we have a good running game. If you can win those three categories you’ve got a chance to win every game.”

LaVerde evaluates his defense after he watches the game film but he credited Chris Sakenes and Ethan McCaslin with solid performances.

He was also pleased with the play of his young offensive linemen.

“They did a really fantastic job defensively,” he said. “I was really encouraged with the young O-line and how they got little bit better through course of game. The first quarter was not super then they got some confidence and played better and you could see them smiling. They could feel it coming. That’s what we want. We want them to get better through to week 11.”