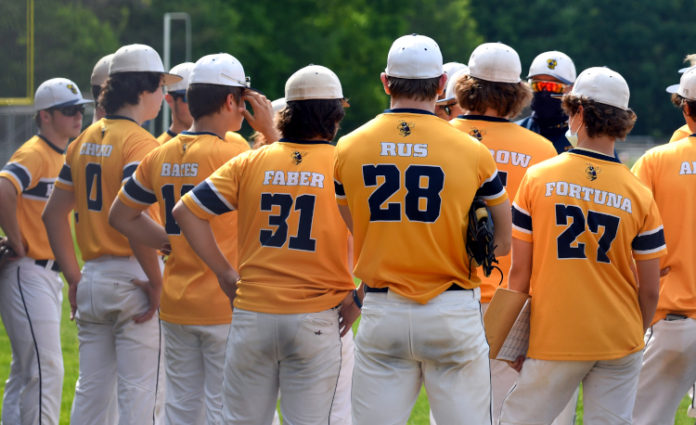 Elyria Catholic scored two runs in the second inning and added a third in the sixth and then held off a late Kirtland rally to beat the Hornets in a Division III district semifinal on Monday, 3-0.

Kirtland matched the Panthers with six hits but couldn’t deliver in the clutch.

“They got a couple of key hits and made us pay for a couple of minor mistakes we had,” said Kirtland coach Luke Smrdel. “That’s baseball. You make a mistake and good teams make you pay and that’s what Elyria Catholic did to us today.”

Two of Kirtland’s hits came in the second inning when Gage Sullivan and Pierce Boyd hit back-to-back one-out singles but Sullivan was picked off first and Anthony DeMarco flew out to end the threat.

The Panthers used that momentum to take a 2-0 lead in the bottom half of the inning on a leadoff single, a walk, and then a two-run single.

Mason Sullivan singled and stole second to start the Kirtland fourth but back-to-back strikeouts and a groundout left him there.

DeMarco singled to start the fifth. Adam Knaak sacrificed him to second and he moved to third on a passed ball.

Again, the Hornets came up empty after a strikeout and a groundout ended the inning.

“We didn’t hit in clutch situations today,” Smrdel said. “Unfortunately, we weren’t able to make things happen in situations we had to score. At the end of the day, that’s baseball.”

Elyria Catholic scored one run on three hits in the sixth to close out the scoring.

Gage Sullivan doubled to start the seventh and Boyd drew a walk but Elyria Catholic retired the next three batters to end the game.

Andrew Spencer went the distance for the Hornets. He allowed three earned runs on six hits and struck out six.

Gage Sullivan led the Hornets at the plate as he finished 2-for-3. Mason Sullivan, Boyd, DeMarco, and Mason Rus each had one hit.

The Hornets finished the season with a 19-10 record overall and won their second straight Chagrin Valley Conference Valley Division title and sixth in the last eight years.

“You look at the season as a whole and I feel like it was a great success,” Smrdel said. “The seniors did a great job this year. I’m proud of all of our guys but the seniors really stepped it up all year to get our second undefeated season in the conference and to get back to districts. Things were more difficult this year but the kids gave it all they had. I’m very proud of the success they had and thank the seniors for all they did. I’m looking forward to more seasons to come of successful baseball.”

Kirtland rallies for win at Berkshire