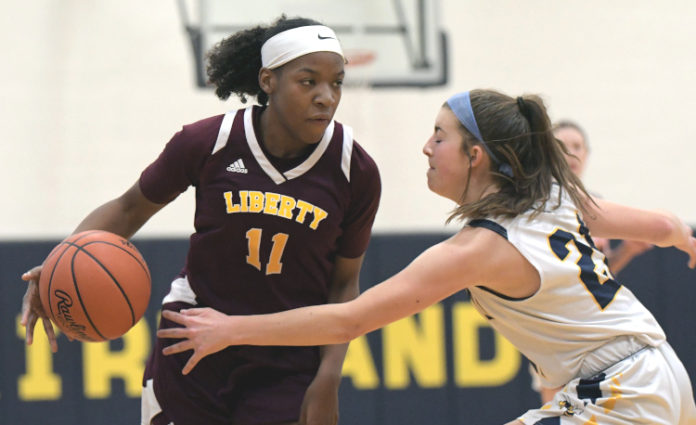 KIRTLAND—The ball teetered on top of the rim for what seemed like an eternity, or at least long enough for a Liberty defender to recover, grab the rebound when it finally did fall, and send it the other way for an easy layup in a Division III sectional semifinal at Kirtland on Wednesday.

That four-point swing with just over a minute remaining in the game ended Kirtland’s season as the Leopards went on to win the back and forth affair, 70-60.

“Their transition completely changed our game plan,” said Kirtland coach Brittany Zele. “We haven’t played against a team that was quicker than us. We had to come out of our full-court press and it made us hesitant going for an offensive rebound for fear of an easy layup on the other end.”

The Hornets led by as many as eight points early as they built a 16-11 first-quarter lead, but the Leopards used their quick-strike offense, grounded in quick passes and easy layups, to outscore the Hornets in the second, 23-11.

When Liberty wasn’t making easy layups they were converting at the free throw line as their aggressive attack led to a lopsided advantage in free throw attempts. The Leopards sank 18-of-25 free throws while Kirtland was just 4-of-4.

The Leopards were 9-of-12 from the line in the fourth quarter as Kirtland was forced to foul after that fateful four-point swing.

“I think that is a stat line that cannot be ignored and it is my hope that this doesn’t happen the rest of the way for other teams,” Zele said. “With it being our best offensive game, going 4-for-4 from the line, it’s hard not to say that it had a huge impact, but we tried to control what we could control and we did foul because we struggled containing. When you’re left with what-ifs, that’s the struggle as a coach.”

Reilly Greenlee, who led Kirtland with 21 points, and Haley Coso, who finished with 12, both scored eight points and Macy McIntosh, who contributed with 18, added six in the first quarter as the Hornets took early control of the game.

Greenlee stayed hot with seven in the second but the Leopards adjusted to Coso and McIntosh and shut them both out until after halftime.

McIntosh found her groove in the third quarter and went on to score 12 second-half points and Greenlee also hit a pair of 3s to rally the Hornets back into the lead after three, 50-47.

“How Macy came through on offense and defense was incredible to watch,” Zele said. “She was the fire we needed and we could count on her at any point. She has always been physically and mentally strong, but this game showed that is capable of more.”

With Liberty leading 59-57 and the clock nearing the one-minute mark, senior Leah LaVerde picked off a Leopard pass and headed the other way for a layup. The ball bounced off of the rim but Corinne Greenlee was there for the rebound and put-back attempt.

Instead, the ball settled in on top of the rim as time stood still.

“Corinne deserved that ball to go in,” Zele said. “She worked so hard all game and what a momentum change that would’ve been. I stared at the ball trying to force it in with some unknown superpower.”

Liberty’s layup on the other end gave the Leopards a 61-57 lead and the Hornets were forced to foul the rest of the game.

Corinne Greenlee finished with four points, Amalie Getting added three and LaVerde scored two in her final game at Kirtland.

“There are so many positives to look at from that game,” Zele said. “I can’t imagine what Kirtland basketball would be without Leah and Haley. They are natural leaders and overall, just amazing, strong, young women. It’s been an honor to be in their lives the last two years and I hope our relationship carries on while they venture out into their next journey. I see nothing but success in their future. All the girls had fun with this game. They thrive on competition.”

Kirtland ended the shortened season with a 12-4 record.