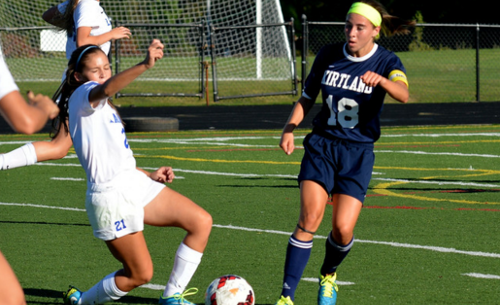 History was made during Monday’s Division III district semifinal between the host Gilmour Academy Lancers and Kirtland Hornets.

Kirtland, the No. 3 seed, defeated top-seeded Gilmour, 1-0, on a Kerri Zalba direct kick in the eighth minute of the game.

“I've honestly never felt so good about anything before,” Zalba said. “Going into the game I was so prepared to give anything to this team and I'm so happy that I was able to contribute with a goal.”

Kirtland is now 1-10-2 against Gilmour Academy.

“I was really calm about it,” said Kirtland coach Ed Bradac. “I get emotional only because I know how hard our team has worked, especially this group of 10 seniors. They aren’t all necessarily on the field but they all have contributed and had a hand in this. I sent a text message out to former players of ours and let them know we won and let them know that they were part of it. That’s why I feel so good. I feel good for all the girls who have come through our program and who have worked hard and who can enjoy this.”

Zalba’s goal was set up when Katie Straus drew a penalty.

“Early on we were trying to figure out who would take those set pieces,” Bradac said. “About halfway through the season we settled on Kerri taking them. The main reason behind that is she strikes a nice ball and I know she’s going to put it on goal.”

Zalba set up about 25 yards from the goal and launched a perfect strike that curved past the keeper and off the post and into the net.

“I had a very similar free kick against NDCL and was able to find the back of the net there too, so I was just thinking about that and how I just needed to place it,” Zalba said. “I just had a really good feeling lining it up; part of me felt that even if it didn't go in off the initial hit it would go in off a redirect. As soon as I saw it go over the keepers head I turned around and ran straight to Claire (Neibecker) and Emily (Kadas) and I was screaming. I was just so excited. It was a great feeling and I'm so happy that this team gets to go on. We play for each other and today was a great example of that.”

From there, the Hornets shifted their focus to the defensive end of the field.

“We had to defend for the next 72 minutes of the game,” Bradac said. “That’s a long stretch. We broke it into segments that were manageable. At halftime we discussed it, I said, ‘It’s 1-0, we’re up. We don’t need to score anymore goals. We simply have to defend and take our chances when they’re there.’ I also told them that at some point we’re going to pull a forward from the front and pull them back for a fourth defender and that’s what we did.”

That point came near the midpoint of the second half after an injury.

Bradac pulled forward Hannah Vouk back to the midfield and shifted Maggie Kadas back to become a fourth defender.

“We had an injury and at that point, rather than risk it we played with two forwards and we pushed Hannah Vouk back to midfield so we played with Lindsay (Ward) and Hannah at center mid and we pushed Maggie Kadas back to one of the natural like stopper positions. We played with four defenders with Maggie back there with her sister Emily.”

That decision wasn’t made in haste.

Bradac considered that option heading into the game.

“I thought if we could score first, I really believed that because of the defense we have behind us, the three girls in the back, Emily, Hallie (Ward) and Kerri, and then you have the best goalkeeper in the area, we have a phenomenal chance, but we had to get that first goal.”

“Because of that defense they didn’t get off any really threatening shots,” Bradac said. “We talked about it all week. I told them we will defend with 11 and keep everything in front of you because if you can do that, if someone takes a shot on (Zuberer) she’s going to stop it.”

Kirtland will play No. 2 seed Hawken in the district championship game at West Geauga on Thursday at 7:00 p.m.