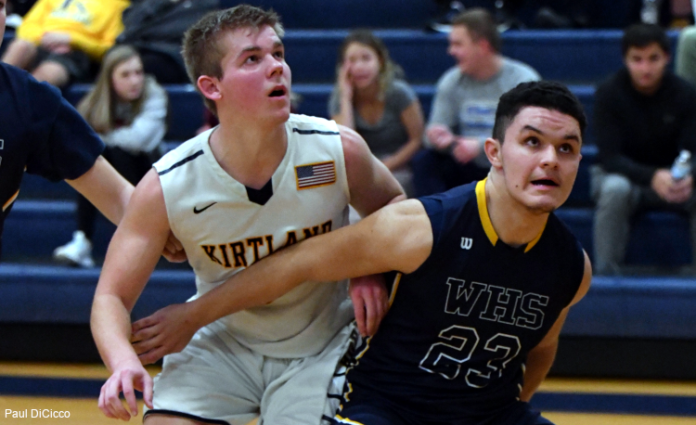 Kirtland struggled to find its rhythm in the first half of its Chagrin Valley Conference showdown against visiting Wickliffe on Tuesday but the Hornets settled in during the second half and pulled out a 66-44 win over the Blue Devils.

The Hornets struggled against Wickliffe’s press in the first half but executed well in the final 16 minutes in improving to 7-2 on the year.

“They did a good job of pressuring the basketball,” Kirtland coach Shawn McGregor said of the Blue Devils. “We had six or seven turnovers in the first quarter and 11 in the first half so their pressure was bothering us. Their big man was blocking some shots, too. They got us a little out of our comfort zone but the kids did a good job of getting back into the rhythm of the game.”

The Hornets used a 20-8 run in the third quarter to take control of the contest.

Zach Samsa and Joey Grazia both scored six points coming out of the break to lead that charge.

“We just started executing,” McGregor said. “At times, we were breaking the press but we were just being lazy with the ball and making some unforced turnovers and missing easy layups. The kids just focused in a lot in the second half and started finishing plays and we got some advantage situations and the kids did a really good job in the second half of finishing plays.”

Samsa finished with a game-high 17 points while Grazia and T.J. Green each scored 13.

“We were prepared for the press but at the beginning, we threw it away a few times,” Grazia said. “We knew we just had to slow it down share the ball and we were going to be OK and get back in the game.”

That trio has played a key role in Kirtland’s strong start through its first nine games.

“We don’t just feed off each other, we feed off our whole team,” Grazia said. “Whenever somebody makes a great hustle play or an extra pass everyone gets more energy off of it and it helps us play better.”

Anthony DeMarco used that energy to score seven points and he pulled down an impressive 20 rebounds.

“He played a tremendous game,” McGregor said. “He got into early foul trouble or he might have had a few more but he’s a beast.”

Brenton Petras and Chase Fortkamp each scored 13 points for the Blue Devils and Anthony Olsen also scored in double figures with 10.