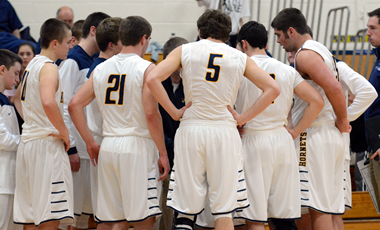 Over the past five seasons, the success of the Kirtland football team in reaching the state championship game has cost the boys basketball team a few weeks of practice time. It also forced the Hornets to start their season several weeks after their peers.

On Tuesday, Kirtland finally tipped off the season and came away with a 53-41 win over Richmond Heights.

“It was pretty good for only having about 72 hours with your guys,” said second-year coach Nick Gallo. “We played very well. We were very sound defensively. They’re very athletic and have a good rebounding team. We just did a nice job containing them off the bounce and made them take some tough shots. That was kind of the name of the game tonight. When you give up 43 points you have a good chance of winning some ball games so we’ve got to continue to do that.”

As expected, the Hornets got off to a slow start and trailed the Spartans, 23-20, at halftime.

Junior Palmer Capretta, who scored a game-high 15 points, hit a pair of 3-pointers that created the momentum the Hornets rode to victory.

“He really put in a lot of time ever since I took the job two years ago and it’s starting to pay off for him,” Gallo said. “He’s only a junior and he has a long way to go, and he knows that, but he came in and knocked down two huge 3’s in the beginning of second half to get us going. We struggled offensively early, probably because of some jitters out of the gate and we haven’t played that much together, but he really set the tone for us. He was never frazzled against any pressure and played a really nice game.”

Senior Evan Madden, one of the stars of Kirtland’s state football championship run, made quite an impact on the court. He scored 12 points and pulled down almost as many rebounds while at the same time defending Richmond Heights 6-foot-9 center Ejiofor Onu.

“It was an Evan Madden-esque kind of game,” Gallo said. “We’re still trying to find out ways to use him but he did a nice job going against their 6-9 kid, Onu, and he did a really nice job of battling all night. He had to have 10 rebounds too and he hit two free throws down the stretch. He was very solid. He was all over the place and commanded the glass tonight. That’s what we’re going to ask of him because he’s such a versatile player.”

Peter Gabor and John Guenther both contributed on both ends of the court.

Gabor scored two points and Guenther four, but their effort on defense played a key role in the Hornets pulling away from the Spartans down the stretch.

“They were very active defensively for us,” Gallo said. “The stuff they did doesn’t show up in the scorebook, getting deflections and making things difficult for their guards all night. I thought they did a really nice job of being active for us and really contributed to the win.”