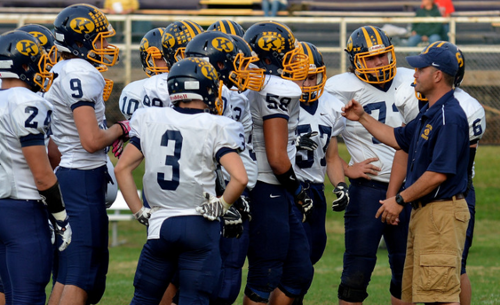 Joey Bates ran for two touchdowns and Joey Torok ran for one, Evan Madden caught a 39-yard touchdown pass from Owen Lewis, Peter Gabor returned an interception for a score and Jake Knox scampered 57 yards for another in the win.

“I was just reading the quarterback and when the ball was in the air,” said Gabor of his second quarter pick-6. “I knew I could make a play out of it. Coach always says to get the ball at its highest point and I tried to do that. When running it back I saw an opportunity to score and when I did it was a great feeling. The defense really helped by blocking after the pick which was the reason I could return it for a touchdown.”

Gabor added a second interception later in the game.

Bates opened the scoring with a 39-yard run with 9:57 left in the first quarter. Madden caught his touchdown pass three minutes later and Torok punched it in from the 6 with 2:59 left in the opening quarter to give Kirtland a 21-0 lead.

Bates opened the second quarter with a 44-yard touchdown run and Gabor made his big defensive play on Fairport’s next possession.

Brad Hauptman was 4-for-4 on extra point tries while Joey Zovko was 2-for-2.

Bates finished the game with 10 carries for 155 yards. He and 16 other Hornets combined to carry the ball 41 times for 321 yards. Fairport was held to just 15 yards on 20 carries and 117 yards of total offense.

Kirtland improved to 7-1 on the year and has allowed just 23 points since a Week 2 loss at Grand Valley.

“It was a tough loss for everyone but it was essential for us to keep on improving,” Gabor said. “We have gotten better every week and the team is playing great. The O-line is improving and is a big factor for our success this year. The defense is doing great and we're feeling better about our team as the season goes on. There is still a lot of areas we can improve on and will continue to do this as the regular season ends.”

The Hornets travel to Cuyahoga Heights on Friday. The Redskins dropped a 41-40 double overtime game at Berkshire on Friday.