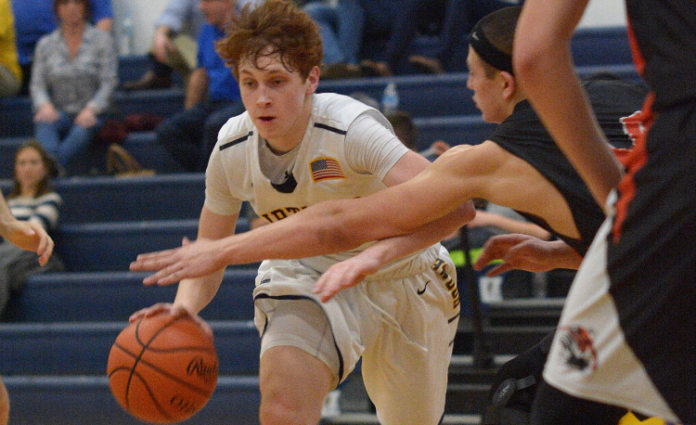 Kirtland built an early lead then held off a Cuyahoga Heights second-half rally to win on Friday, 57-55.

The Hornets led at halftime, 33-19, before the Redskins outscored the Hornets 18-12 in both the third and fourth quarters.

“Cuyahoga Heights is always a tough place to play, so any time you can come away with a win you’ve got to be happy,” Kirtland coach Shawn McGregor said. “Mike (Tartara) does a great job of switching things up. Their zone bothered us into some unforced errors, but the Kirtland boys stepped up.”

Dom Capretta scored 10 of his team-high 14 points in the first half as the Hornets built their lead.

“Tonight for me was all about attacking off the dribble and being as aggressive as I can,” Capretta said. “I tried to push the ball as fast as I could so that we could get some quick transition points.”

Seann McGill and Adam Mueller both contributed to the win with eight points and Jack Bailey, Luke Camino and Zach Samsa finished with six points each.

“We had contributions up and down the roster, which is who we are,” McGregor said. “Dom led us on the floor throughout the night and Tommy Powers, Seann McGill and Dawson Cosgrove made clutch baskets and offensive plays down the stretch, while Adam Mueller came up with the biggest play of the night with a huge steal. We had opportunities to quit tonight and we didn’t. To win a game like that the way we did shows a ton about our kids’ character.”

Nassiem Salem scored a game-high 25 points for the Redskins with 17 of them coming from the charity stripe.

Kirtland improved to 2-0 overall and 2-0 in the Chagrin Valley Conference Valley Division while Cuyahoga Heights dropped to 3-2, 2-1. The Hornets travel to Fairport Harding on Dec. 28. The Redskins next travel to independence on Dec. 27.