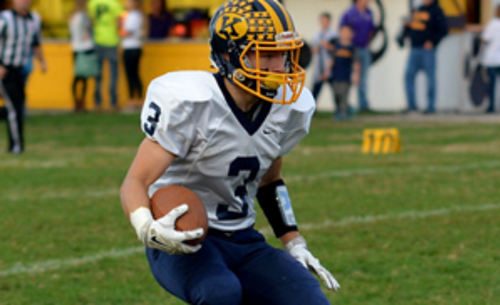 Kirtland’s David Allchin rushed for a game-high 140 yards and scored three touchdowns and Peter Gabor picked off a pass and also broke up a potential game-tying 2-point conversion with 35 seconds left in the game to lead the Hornets to a 28-26 win at Cuyahoga Heights on Friday.

With the win the Hornets improved to 8-1 overall and clinched a berth in the Division VI playoffs.

“It was a great game; it was awesome,” said Kirtland coach Tiger LaVerde. “This was a big one. We didn’t necessarily have the playoffs locked up until we won tonight. It was good to get this one and get the pressure off. If we would have lost these last two we might not have gotten into the playoffs. It was good to get this one and next week if we win we would be the only undefeated team in the conference. If they win we’d both be 6-1 so it’s really for an outright championship.”

Allchin opened the scoring with a 24-yard touchdown reception early in the first quarter.

That lead held until Cuyahoga Heights quarterback Brett Lowther found Dylan Drummond for a 36-yard touchdown pass that tied the game with 1:28 left in the first half.

Lowther and Drummond hooked up again on the first possession of the second, this time for 59 yards, to give the Redskins a 14-7 lead.

The Hornets fumbled on the next possession but Gabor picked off a pass at the Kirtland 3-yard line and returned it to the six.

“The interception was huge,” Gabor said. “Being a corner you have to play the next play no matter what. On the play I had to recover and just tried to make a play. Coming off a turnover we had to stop them and when I had my hands on it I knew it was my ball.”

Seven plays later Allchin scored on a 32-yard run to tie it. He also had two 37-yard runs in the series.

“He had a nice game, he really did,” LaVerde said of Allchin. “We were down 14-7 and we fumbled and they got the ball. Peter Gabor intercepted one at like the 3-yard line. He had a big run out to about the 40 and then he had another big run for a touchdown. We had like a 97-yard drive to tie it at 14. He had two big chunks in there.”

Allchin scored his third touchdown on a 16-yard run to give the Hornets a 21-14 lead with 20 seconds to go in the third quarter.

“It was huge for us with the (league title) and playoffs on the line tonight,” Allchin said. “We wore them down during the game and ultimately ended up getting the win. The line was huge tonight they opened up holes and pass blocked really well. I'm so proud of them. They get all the credit. All I had to do was hit the holes.”

Cuyahoga Heights tied it on a 7-yard run by Joey Stefanko midway through the fourth but Joey Bates, who ran for 137 yards on 23 carries, put Kirtland back on top with a 9-yard touchdown run with 3:53 to play.

Again, the Redskins responded with a 10-play, 60-yard drive that ended with a 6-yard pass from Lowther to Drummond.

Drummond, who caught nine passes for 169 yards and three touchdowns, was Lowther’s target on the two-point try, but Gabor batted away the pass to seal Kirtland’s win and playoff future.

“I knew they were going to him,” Gabor said. “(Drummond) is a great receiver and we were battling the entire night. When the ball was in the air and I looked back everything was in slow motion. I couldn't hear anything and I was focusing on the ball. I turned my head, jumped up and knocked the ball away. After the play I was just crying tears of joy, it was the worst best game of my life. I have to thank the O-line and the offense for keeping up with Heights and their offense. It was a total team effort and a great win.”

Kirtland closes out the regular season with a home game against Hawken on Friday.

“Hawken played Heights very tough,” LaVerde said. “It could have went either way. We’ve got to prepare hard this week. It will be another fun game. It’s good to play these games going into Week 11.”