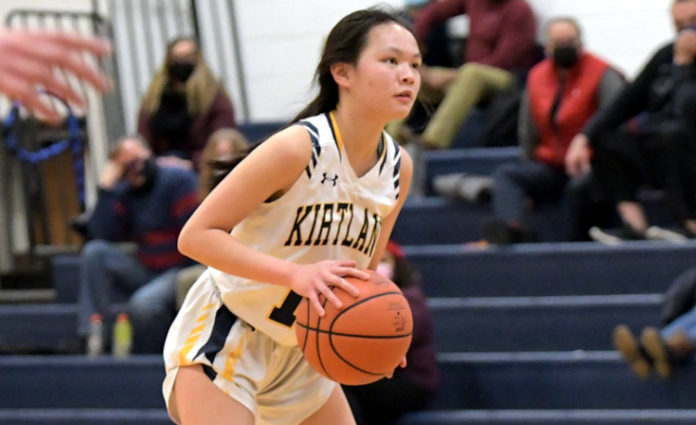 Kirtland held a comfortable double-digit lead at halftime with its nonconference game against visiting Chagrin Falls on Wednesday but had to hold off the Tigers in the second half for a 34-23 win.

Chagrin Falls outscored Kirtland in the third quarter, 8-2, but the Hornets hit key shots and free throws down the stretch to improve to 11-3 on the year.

“Chagrin is well-coached and disciplined,” said Kirtland coach Brittany Zele. “Coach (Brittany) Anderson made the move to stay in a 2-3 (defense) and take out her full-court diamond, which is what helped bring them back in the game. We love playing against zone but with our inconsistency in scoring, I think mentally it altered some decision-making, which led to missed shots and defensive mistakes.”

Haley Coso, who scored a game-high 12 points, helped the Hornets build an early lead by scoring six first-quarter points. She added another bucket in the second quarter as Kirtland took an 18-8 lead into the break.

“Rebounding and scoring were our two concerns coming in,” Zele said. “In the first half, we did very well with keeping them off the boards and hitting our shots.”

Julia Santamaria sparked Chagrin Falls’ comeback as she scored six of her team-high 11 in the third quarter. She also hit a 3-pointer in the fourth but the Hornets made clutch plays of their own to fend off the Tigers.

Reilly Greenlee, who scored seven points, drained a pair of 3s and was 1-for-2 from the line in the fourth quarter and Leah LaVerde, who also scored seven, hit a 3-pointer and connected on both of her fourth-quarter free throws.

“They hit clutch shots that are intimidating to take when you are nearing the end of the game and your lead was cut to three,” Zele said of Greenlee and LaVerde. “It takes courage to take those shots and it will only help them down the road when we continue to play close games.”

LaVerde is settling in after missing several games prior to Kirtland’s shutdown.

In addition to her key shots in the fourth quarter, she also keyed Kirtland’s defensive effort.

“In the third quarter, we definitely struggled scoring but, thankfully, played great defense that kept us from giving up too many points so we could stay in the game,” LaVerde said. “After the third quarter, Coach Zele asked us all to really step up and take control of the scoring. I think we all realized we needed to be more confident in our offense and take responsibility for our scoring and, thankfully, we were able to do that.”

Kirtland has now won four straight games, including three straight since coming back from its COVID shutdown.

The Hornets have one regular-season game remaining before opening the postseason.

“I think we are really coming together at just the right time as a team,” LaVerde said. “Mentally, our game improves every time we play and that is going to be the most important part for us. Being positive and confident in each other has allowed us to win these last few games and that will definitely translate well as we enter the tournament.”

Corinne Greenlee and Macy McIntosh contributed to the win with five and three points, respectively.