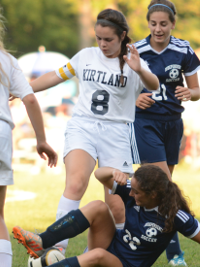 Hornets hold on for 3-2 win over St. Joseph Academy

The Kirtland girls’ soccer team headed into Wednesday’s non-conference game against St. Joseph Academy hoping to pull out a win, stay healthy in their regular season finale and finish the season with 10 victories for the fourth straight season.

With a 3-2 win, the Hornets accomplished all of those goals.

Kirtland, which closed out the regular season with a 10-4-2 record, scored two first half goals and another early in the second half to take control of the game.

“We had the wind in the first half and that definitely made a difference, more of a difference than I thought it was going to make,” Bradac said. “I was really pleased with the way we scored.”

Angela Ritossa scored Kirtland’s first goal on a cross from Ariana Cubela. Katie Straus later netted her first goal of the year with less than a minute remaining in the first half.

“Angela was in the right place at the right time and she did a great job finishing,” Bradac said. “On Katie’s, I always talk about that five minute window at the beginning and the ending of the half. She scored our second goal with under a minute to go in the first half. It was a really nice goal. Katie stayed home on the back post and the ball rolled through. She did a nice job to finish it. I was really excited for her.”

Bradac knew the Division I Jaguars would put up a fight in the second half.

“At halftime, I told them we could either make this game really easy or really hard,” he said. “Who is going to get that next goal? To our credit, Katie Straus scored again on pure work ethic. She beats the goalie to the corner to win the ball and had enough presence to finish from about 18 yards out. She doesn’t panic. For me, that was fantastic because we stressed that third goal.”

Little did the Hornets know at the time but that goal was the difference maker as St. Joseph Academy found the net twice in the second half.

“I don’t know if we got a little too comfortable and thought it was going to be easy,” Bradac said. “Give St. Joe’s credit. They battled back.”

The Hornets host Berkshire in a Division III sectional game on Monday.