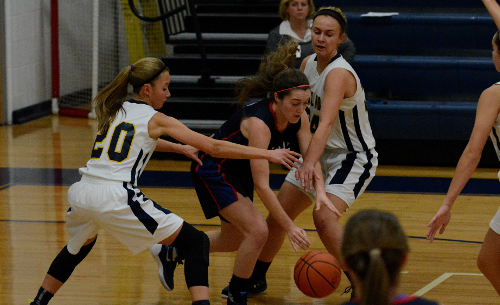 KIRTLAND—Thanks to the Kirtland girls soccer team’s run to the state final four, the Hornets’ girls basketball team didn’t have much time together in the preseason to prepare for Friday’s season opener against visiting West Geauga.

The Hornets used a stifling defense to create opportunities on the offensive end and rolled to a 74-38 win.

“The key that set all this up was our defense and our hustle,” said Kirtland coach Bob Bell. “The way we played created a lot of things. The teamwork was good, the ball movement was good and the shot selection as pretty good.”

Behind senior Taylor Somodji and sophomore Sydney Snyder, who scored 21 and 18 points, respectively, the Hornets jumped out to a 17-5 lead after the first quarter and led, 41-18, at halftime.

The soccer team’s run to the final four helped to inspire the Hornets.

“That’s a big goal for us now,” Somodji said. “We have big shoes to fill.”

Claire Neibecker scored 10 points, had six assists and led the team with 11 rebounds. Deanna Ponzani scored six points and had five rebounds, Grace Powers had four points and Kerri Zalba helped put it all together.

“Grace always gives us good defense,” Bell said. “Grace is just a spark plug, no matter when she comes on the floor. Kerri Zalba did a great job on defense. She didn’t get many scoring opportunities but she runs just the team for us and runs it well. Deanna Ponzani did a really nice job at the post for us.”

Somodji added 10 rebounds for the Hornets.

“We ask them to share the ball and the more you share it the better shots you get,” Bell said. “I thought that worked real well for us tonight.”

Katie McCollister scored five points and Jenna Sayle and Lauren Bottesch both had four for the Hornets.

“That right there says a lot for the offense,” Bell said. “Nine out of the 10 kids on the team scored.”