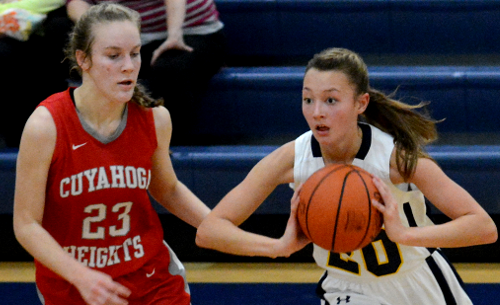 KIRTLAND—Senior Taylor Somodji scored a game-high 20 points and Kirtland dominated the paint in a 50-32 win over visiting Cuyahoga Heights on Saturday.

With the win, the Hornets remained undefeated and took over sole possession of first place in the Chagrin Valley Conference Valley Division.

“It was a good ball game,” said Kirtland coach Bob Bell. “Our kids went out and executed the game plan. They played hard. We just said just go out and make it happen; find a way to win and they did.”

Cuyahoga Heights, which dropped to 5-2 overall and 3-1 in league play, tried to take Somodji out of the game. That left Kirtland’s interior players open for some good looks at the hoop. When the shots weren’t there they kicked it back out to Somodji.

Deanna Ponzani finished the game with eight points and seven rebounds and Claire Neibecker pitched in with six and six. Somodji pulled down six rebounds.

“They tried to key their defense on Taylor because Taylor is our leading scorer,” Bell said. “We tried to make sure that everybody else was part of the offense and by doing that when the other girls got involved in the offense it kind of freed Taylor up a little bit more. We were pretty happy with that.”

Bell also expected the Redskins to try to dictate a slower tempo, like they did in a 35-29 win over Richmond Heights earlier in the week.

“We knew that they wanted to try and control the tempo of the game,” Bell said. “We felt that if we could generate some offense and put some pressure on them defensively, and that’s what we did, we’d go to a little half trap and then back to the man and so forth. We were hoping it would keep them off balance. For the most part it did.”

“They did some things well toward the end of the game they started attacking the basket against us a little better so we switched it back to the half trap,” Bell said. “We kept their 3’s at bay. If you would have told me they were going to make four I would have said that’s OK, we’ll accept that because they’re capable of making 10.”

The Hornets are the only undefeated team left in the Valley Division and they control their own destiny, but Bell won’t let them get comfortable with their position.