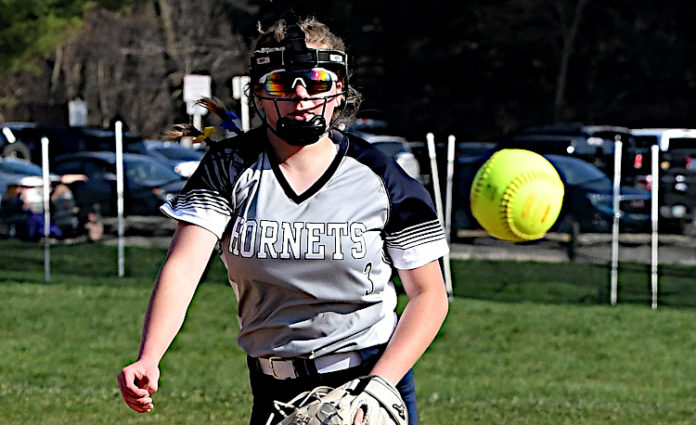 West Geauga scored seven runs in the final two innings to spoil Kirtland’s bid for a season split with the Wolverines.

The Hornets scored three runs in the third and five in the fifth to take a 7-1 lead into the sixth inning before West Geauga used a sacrifice fly in the bottom of the seventh to score the winning run.

“The loss is development for our team,” said Kirtland coach Jamie Kamensky. “We put ourselves in a good spot with the potential to win. The next part of our development is closing out games. We’re knocking on the door to beating very good teams; now it’s time to kick it open and show we’re here.”

West Geauga strung together a pair of singles to jump out to a 1-0 lead after one inning.

The Hornets scored three runs on five hits in the third.

Stephanie Drazetic started the rally with a leadoff single and moved to third on Gianna DiFranco’s one-out single. Bella Hostutler then singled home Drazetic to tie the game and Madison Matijevic doubled home DiFranco and Hostutler for a 3-1 lead.

DiFranco led off the Kirtland fifth with a single and Hostutler followed with a double. Matijevic walked to load the bases and Gianna Cantini walked home Kirtland’s fourth run. Nikolena Samac hit a sacrifice fly and Chloe Ungrady followed with a two-run single to give the Hornets a 7-1 lead.

“Our approaches were amazing today, head down on the ball, swinging through the zone and at good pitches,” Kamensky said. “Even on outs and strikeouts, we took their pitcher deep in counts. This is a huge shout-out to Coach Eric Cantini, who has been taking the leadership role of hitting with our kids. It’s starting to come together really nice.”

West Geauga saved its best for the final two innings.

Shea Malone, Tara Gall, and Madison Fink opened the sixth with back-to-back-to-back singles and Lauren Kretschman reached on an error that allowed two runs to score. Kretschman scored on Haley Ottman’s groundout to pull the Wolverines to within 7-4.

Frankee Flesher led off the West Geauga seventh with a double and Kiera Williams drew a walk. Malone then reached on an error and Gall singled to bring up Fink, who hit a sacrifice fly to score the winning run.

For the Hornets to lead for most of the game and lose to the Wolverines by just one is a sign of the growth and maturity Kamensky is looking for out of her players.

DiFranco, Hostutler, Matijevic, Cantini, and Ungrady all had two hits for the Hornets, who outhit the Wolverines, 12-8. Cantini allowed five earned runs on eight hits and struck out six.

“This was a full team effort,” she said. “The fight, the drive, the support, and the heart was there. This team is something special.”