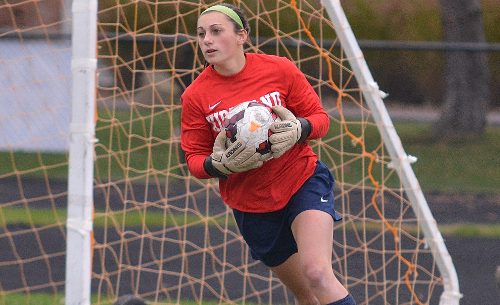 The realignment of the Chagrin Valley Conference offered the Kirtland girls’ soccer team an opportunity they couldn’t pass up.

After winning five of the last six Valley Division championships the Hornets moved up to the Chagrin Division for the 2015 season and opened the year with a 3-0 win at Perry on Thursday.

“I think that will be a test all year long,” said Kirtland coach Ed Bradac. “This was our first test and I think they did a nice job.”

Despite seven of 11 starters in new positions, the Hornets rolled to a 3-0 halftime lead and never let up.

“I thought the girls moved the ball well,” Bradac said. “We’re starting with a whole new group. When you look at it, we have seven players playing new positions from what we had a year ago so it will take a little time for them to jell. That’s why I thought the 3-0 score was a nice way to begin.”

Katie Straus scored two first half goals, one assisted by Hannah Vouk and the other by Claire Neibecker, and Deanna Ponzani scored one, assisted by Lauren Lutz.

The Hornets missed out on a few other scoring opportunities.

Straus, who scored three goals and had four assists last season, scored off a corner kick and a throw in.

“What I love about Katie is how far she has come from her sophomore year to her senior year,” Bradac said. “This is the first time that she has scored two goals in a game in her high school career. I think that work ethic that she has on the track (team) carries over to our soccer team, which is great. She’s been fantastic for us.”

Ponzani, who now has four goals to go along with 11 assists in her Kirtland career, scored from distance.

“She scored off an absolutely beautiful shot from about 20 yards out,” Bradac said. “She’s another one that has worked very hard to get to this point for her senior year.”

Vouk, a sophomore who tied for the team lead with 11 goals last season, was very active at her forward position.

“She had the one assist but she had such a work rate,” Bradac said. “She did a tremendous job up top at forward. She made some great runs, was very verbal. I’m very pleased with how she played as a sophomore. There’s a lot of potential there.”

Maddie Zuberer and Gabby Culotta combined to record a clean sheet in goal. Culotta recorded one save.