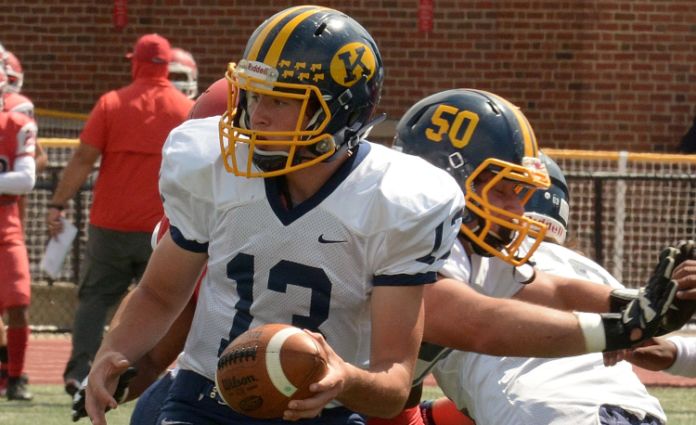 Over 100 years ago, Knute Rockne revolutionized the game of football by introducing the forward pass in Notre Dame’s shocking 35-13 win at Army on Nov. 1, 1913.

Rockne continued to reshape the game by traveling his team across the country to play anyone, anywhere.

During this season shortened by the Coronavirus, Kirtland coach Tiger LaVerde has taken a similar approach. Ok, maybe he’s not quite as excited about the forward pass as Rockne was but LaVerde and his version of the Ramblers are open to playing anyone this season with results similar to that of Rockne’s teams.

Kirtland’s latest David vs. Goliath contest resulted in a 27-7 win at Division I Solon on Friday. It was Kirtland’s second win over a Division I program in three weeks.

“This is my 15th year here, and this is by far our toughest regular season game we’ve scheduled,” LaVerde said. “We’ve had some good wins, we’ve had some bad losses, but this was a fun one.”

It started out similar to most Kirtland games.

The opponent receives the kickoff and quickly punts the ball back to the Hornets, who march 80 yards for a touchdown.

Except, in this case, there was less marching and more flying as Liam Powers capped the drive with a 22-yard touchdown pass to Gage Sullivan.

Powers closed out the game 8-for-10 for 89 yards and two touchdowns.

“As a team, we are really riding high right now,” Powers said. “Knowing that we can compete with the bigger schools really shows us our potential and how good we can be. It’s very exciting to know that it will be a battle the entire game, especially with a Division I team, and when you see people doubting our team on social media, it makes the victory so much sweeter.”

Solon responded with a touchdown pass of its own but the Kirtland defense shut down the Comets the rest of the net.

“Our defense was incredible tonight,” Powers said. “All 11 guys were flying to the ball and really shut down their offense. They were able to move the ball a little but our defense never stopped working and that made the biggest difference tonight.”

Powers and Sullivan connected again early in the second quarter on a 13-yard touchdown pass and catch and Powers ran for a late score to push Kirtland’s lead to 21-7 at the break.

Mario Rodin booted field goals of 30 and 27 yards in the second half to close out the scoring.

Powers led the Hornets on the ground with 121 yards on just nine carries and he scored the one touchdown. Anthony DeMarco added 81 yards on 14 carries and Mason Sullivan rushed 14 times for 65 yards.

“I feel the biggest factor in (Kirtland’s offensive success) is our high run percentage,” Powers said. “Since we run the ball so much, defenses really bite on the fakes and that opens the QB counters and play-action passes and without guys like Mason, Anthony and all the linemen, there would be no one to open holes for me to run through.”