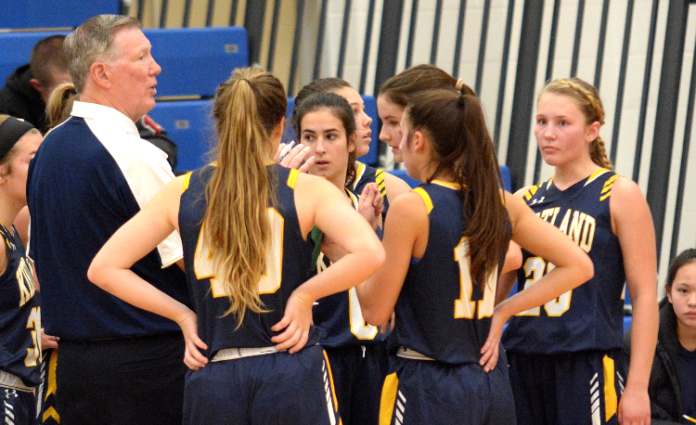 Kirtland used a stifling defense to down visiting West Geauga in a non-conference game on Saturday, 68-20.

The Hornets held the Wolverines to seven or fewer points in each of the four quarters.

“That was quite a win,” Kirtland coach Bob Bell said. “I don’t think anybody expected the score to be that lopsided. They were 4-2 going in so we prepared ourselves for a tough game and the kids went out and played very good defense. We shot the ball well tonight and things really fell into place.”

Kirtland jumped out to a 19-2 lead in the first quarter and the Wolverines never threatened.

“We just dug in and played really good hard-nosed man-to-man defense in the half court,” Bell said. “We didn’t press. We thought maybe we’d just see if we could shut down their scorers in the half court and we managed to keep them from putting the ball in the basket.”

Jenna Sayle led the Hornets with a game-high 23 points. She added three rebounds and two steals.

“We did a good job moving the ball on offense and playing good defense,” Sayle said. “We were very aggressive in our man defense and got a lot of steals.”

Grace Wolfe added 13 points in the win and also led the Hornets with nine rebounds.

“Our kids were really focused,” Bell said. “This was by far one of the best defensive games we have played in a long time and we generally play good defense.”

Kirtland out-rebounded the Wolverines, 35-13, and shot 53-percent from the floor.