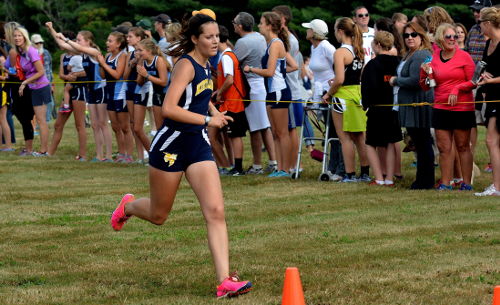 Hornets peaking at the right time

Kirtland’s cross country teams are peaking at the right time.

The Hornets combined to run nine lifetime personal best times and two season bests at the Legends Meet on Saturday at the Trumbull County Fairgrounds.

“It was a great day,” said Kirtland coach JP Moran. “Overall, we were 21st of 37 for the boys and 22nd of 44 for the girls, so we were kind of in the middle of the pack at that meet, which is kind of what I expected. I was more focused on the kids getting in a good race before CVCs and districts and being the district course. That course is usually a mess and we finally got it on a really great day so I think that helped a lot too.”

Seniors Kevin Cummings and Christine Walsh were among the top finishers for the Hornets.

Cummings finished 59th with a time of 18:04, the second fastest time he has ever run, and Walsh finished 79th with a lifetime best time of 22:11.

“It wasn’t just the freshmen, as they’re getting better they improve so you’re seeing lifetime PRs from them because it’s only their first year, but Kevin had his second best time ever and he’s a senior,” Moran said. “That was Christine’s best time ever. It’s her senior year and it was heading into the CVCs and district. She’s been a little banged up with her foot but I was yelling to her at the end. She had a real shot at the 21s for her time. I know she’d love to be down there but she missed it by 11 seconds.”

“One big thing too, we had our top five girls were under 25 and the guys, the top five were under 20,” Moran said. “We’re seeing a lot of people improve and peak at right about the right time.”

The Hornets will next run at the Chagrin Valley Conference meet on Saturday at Hawken.

“We’re just trying to improve on our place in the conference,” Moran said. “Last year, Kevin and Christine were second team all-CVC, so obviously their goal for both of them is to be first team all-CVC, which would be awesome. I think our kids, with all those lifetime PRs and season PRs, they’re all racing well right now and getting experience.”