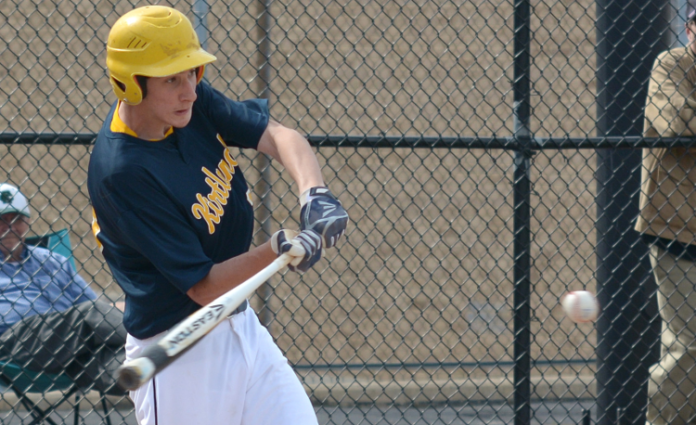 The Hornets scored the first four runs of the game then held off the Blue Devils the rest of the way to improve to 2-2 overall and 1-0 in league play.

“This was a very big win for us, especially being on the road against a good team,” Kirtland coach Luke Smrdel said. “It wasn’t the prettiest of victories, but a win is a win.”

The Hornets manufactured a 1-0 lead in the top of the second when Nick Ribic and Reese VanArnhem drew back-to-back one-out walks and moved up to second and third on Joey Torok’s fielder’s choice.

Ribic scored when Joey Mongelluzzi reached on an error.

The Hornets added three more runs in the fourth, all with two outs.

VanArnhem singled and stole second to start the rally.

Torok and Mongelluzzi hit back-to-back singles and Seann McGill reached on an error to make it 4-0.

“With the wind blowing in as hard as it was today, I told the guys we need to put the ball in play and use our speed more than anything,” Smrdel said. “We were able to take some bases and move around to get some clutch runs. We focus on situational hitting a lot and trying to move guys around the bases. We did okay doing that today but we had way too many strikeouts looking today. We definitely need to cut that down and get the ball in play when there are two strikes.”

With a four-run lead, the Hornets put the game in the hands of their pitchers.

Andrew Spencer picked up the win after going four strong innings. He allowed just one earned run on two hits and struck out five.

Vince Liuzzo finished off the game by allowing an unearned run on three hits with a pair of Ks.

“Spencer had another quality start,” Smrdel said. “He showed a lot of grit working out of two bases-loaded jams. I am extremely pleased with the toughness I’ve seen out of him in these first two starts.
Vince is one of our go-to guys out of the bullpen because he can come in and pound the zone. He did a great job of that, and even when our defense struggled a bit, he did a great job of working through that and limiting the damage.”

After opening the season with two losses, the Hornets have won back-to-back games heading into a non-conference showdown at West Geauga on Thursday.

“We still have some stuff to clean up but our guys have a competitive mindset which definitely helps us in games like today’s,” Smrdel said.