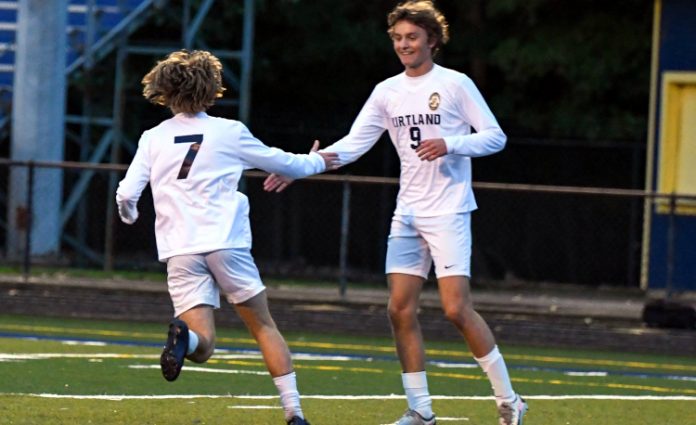 Kirtland’s conference game at Grand Valley was cut short due to a stadium lights issue but the Hornets needed only that first half to dominate the Mustangs.

“The light situation was definitely not preferred and it made playing on the field more of a challenge,” de Zwaan said. “It took a lot of focus to spot the ball, so it was for sure a weird experience, but nothing we couldn’t handle.”

Dures now has 10 goals and de Zwaan has 15 despite both missing time with injuries.

“My first goal was a volley in the air from a ball that ricocheted off of someone. I placed it in the bottom left corner and the goalkeeper didn’t have enough time to save it,” de Zwaan said. “My second goal was a header. I was a foot above the other players in the box and with a great ball from Marco Valentic it wasn’t hard to put it in the back of the net.”

Valentic recorded three assists while Dures and Vince Carriero each had one.

With the win, the Hornets extended their winning streak to five straight games and are now 9-1-1 overall.

“Our team is undoubtedly very talented this year and we have many options to score goals,” de Zwaan said. “Personally, I enjoy working with players at such high skill level and I’m excited to see where we’ll go.”