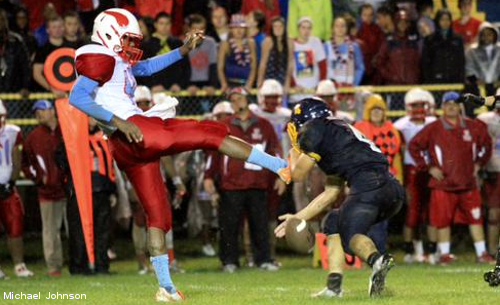 Hornets rebound with 30-0 win over VASJ

KIRTLAND—In the past four seasons the Kirtland football team has lost just two games, both in Week 15, and each time the Hornets had an entire off-season to bury the emotional setback and to prepare for a new year.

Kirtland responded with a 30-0 drubbing of visiting Villa Angela-St. Joseph.

“They didn’t like it,” said Kirtland coach Tiger LaVerde of the streak-ending loss. “They took it like it was a state game. They had better focus this week.”

That focus helped the Hornets get back to doing what they do best.

“It was a long week,” LaVerde said. “I was ready to play again after last Friday. That was not a fun night for us, but we’ll learn from it. (The offensive line) had a rough week last week but they came back strong. They had some big, strong kids on their defensive line, and they did a nice job handling them and creating some holes for our backs.”

David Allchin led the Hornets with 84 yards on 18 carries and Joey Bates carried 18 times for 60 yards and scored twice. His first touchdown, a 6-yard run, gave the Hornets a 7-0 lead with 4:50 left in the first quarter.

Allchin and Evan Madden hooked up on a 41-yard pass and Owen Lewis ran for a two-point conversion with just 38 seconds left in the half to give the Hornets a 15-0 lead at the break.

“We called like a quick pitch pass,” Allchin said. “I was excited. I love throwing the ball. The corner bit up so (Madden) was wide open. I just threw it as far as I could. It happened to be a good pass and he ran underneath it and caught it for a touchdown.”

Bates ran for a 1-yard score late in the third to make it 23-0 and the Hornets capitalized on Vinny Matticoli’s blocked punt at the VASJ 25 with Allchin’s second rushing touchdown to close out the scoring.

For Allchin, the win helped erase one of the longest weeks of his high school career.

“It was great,” he said. “All week you’d hear about how the streak is broken. We cared about it but now that it’s over we’ve just got to focus on the next game. It was great to get a W.”