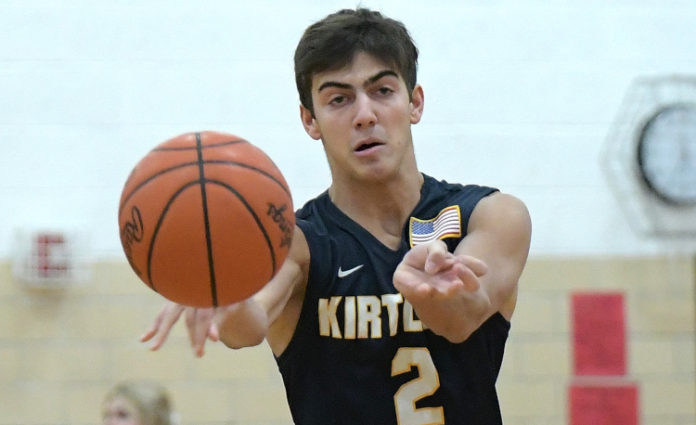 Hornets regroup in win over Badgers

Kirtland took a better late than never approach in its 48-40 win over visiting Berkshire on Friday.

The Hornets struggled to find their offensive rhythm in the first half but a tenacious defense turned the tide in the second as Kirtland outscored the Badgers, 28-13, to improve to 3-4 overall and 2-0 in the Chagrin Valley Conference Valley Division.

“The kids were playing super hard, it wasn’t an effort thing,” said Kirtland assistant coach Matt Ridgeway. “They really wanted to take it upon themselves to win the game. In the second half, we just decided to get our best player the basketball a little more. We settled down and the kids did a good job of that.”

Berkshire held a 27-20 halftime advantage based on the Badgers’ ability to disrupt Kirtland’s offense.

“They were in their 2-3 zone that we just weren’t accustomed too and we turned the ball over,” Ridgeway said. “They were pretty consistent with what they did the whole game but we executed a little better as the game progressed.”

“At halftime, we put in the philosophy of how we were going to attack this into football terms,” Ridgeway said. “We talked about what their go-to play was in football, which was Power Right, so I said, ‘Let’s go to Power Right on the block and let’s take advantage of our size and put the ball down inside and then work inside-out.’ All the kids chipped in with that philosophy.”

Joey Grazia entered the fourth quarter with just three points off a 3-pointer late in the third quarter. He ended the game with 11.

He added a 3-pointer early in the fourth and then hit 5-of-6 free throw attempts.

“I just became more aggressive with the basketball attacking the basket drawing fouls, which I didn’t do for much of the first three quarters,” Grazia said. “They had much more energy than us in the first half. We came out in the second half with some energy on the defensive end and got some steals and turned it into easy offense.”

T.J. Green also scored 11 for the Hornets but all of his points came before the fourth. He was a big part of Kirtland’s defense that limited the Badgers to just six points in the final eight minutes.

“I thought T.J. Green played really well,” Ridgeway said. “We switched up our defense and just settled down to work the ball for a good shot. We got some tips and loose balls where we swung it and Joey was open and he hit the shot. Because of our effort, especially on the defensive end, that kept us in the game and then finally we hit that stretch where we scored a few buckets.”

Mason Sullivan contributed eight points in the win and Anthony DeMarco and Gage Sullivan finished with six and five, respectively.

Kirtland travels to Cardinal on Tuesday with first place in the Valley Division on the line. Cardinal also enters that game with a 2-0 league record.

“That’s our No. 1 goal,” Grazia said of winning the league. “We knew that coming in and with some (adversity) at the start of the week, to pick up this win was huge and gives us some momentum going into next week.”

Depth pays off as Kirtland picks up first win