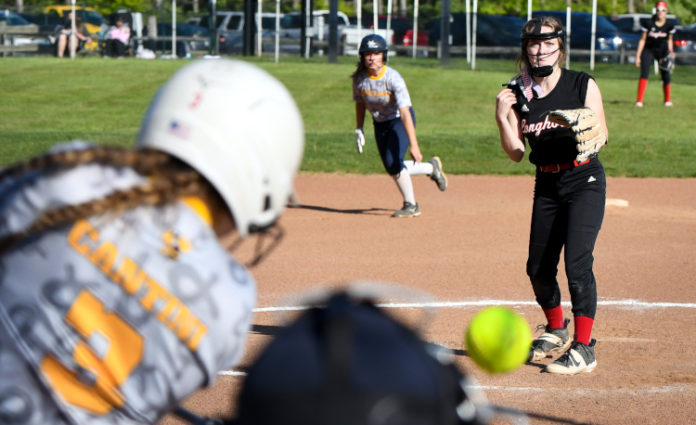 “It was huge,” said Kirtland coach Jamie Kamensky. “We actually talked about how this game could sand trap them and, to be honest, Lutheran West came hyped and ready to play. We had a little tighter strike zone to work with, but ultimately the kids adjusted and got going. That was the key.”

Lutheran West got off the bus and went right to work attacking the Hornets.

Shannon Ahern reached on an error with one out and Carina Cedeno tripled her home. Kristen Zak followed with a single and oved to second on the throw home. Leslie Sullivan then walked and Grace Kandrach hit an RBI single to give the Longhorns a 3-0 lead.

Kirtland loaded the bases in the bottom of the inning but a line drive to Lily Thomas resulted in an unassisted double play that ended the threat.

Undeterred, the Hornets rallied for eight runs in the second.

Samac then hit a bases-clearing double for her second hit of the inning.

“Being able to help start some rallies today was a great feeling,” Samac said. “Today, I approached my at-bats with the utmost confidence that I would be able to hit the ball and make a difference. Our coaching staff always preaches confidence and I could feel good energy coming from my coaches and teammates today. I also approached my at-bats with the motivation to contribute something great to the team. I have amazing teammates around me and you can see that everyone puts forth their best effort all of the time. The key to my success today was definitely confidence. Having belief in your team and, especially having belief in yourself, always leads to positive outcomes.”

Zak singled and scored on a Thomas double in the third to pull Lutheran West to within 8-4 but the Kirtland bats went right back to work in the bottom half of the inning.

Avery Kuczkowski drew a leadoff walk and moved to second on Gianna DiFranco’s single. Hostutler walked to load the bases and Madison Matijevic and Cantini both were hit by a pitch to make it 10-4. Puruczky reached on an error and Malia Becker was hit by a pitch. Stephanie Drazetic hit into a fielder’s choice that scored the fifth run of the inning.

The Hornets invoked the run-rule with one in the fourth.

DiFranco singled, Matijevic doubled and Cantini hit a sacrifice fly to close out the scoring.

Cantini shut down the Longhorns in the fifth to end the game. She allowed two earned runs on six hits and struck out eight.

“We have had one of the craziest and most exciting weeks as a team,” Samac said. “We have had two huge team wins to jumpstart our journey into the playoffs and to be able to rally together to win today was incredible. We have established a resilience as a team that we were able to channel today. We were down by three runs in the first inning but we were able to bounce back quickly, which I believe is rooted from the bond we have as a team. We are where we want to be and our effort and recent victories have proven that.”

The Hornets improved to 10-13 overall after starting the season 0-4.

“The girls have really grown,” Kamensky said. “I think seeing better pitching the last few weeks has really helped them realize they can hit everything and anyone. It’s just the mindset.”