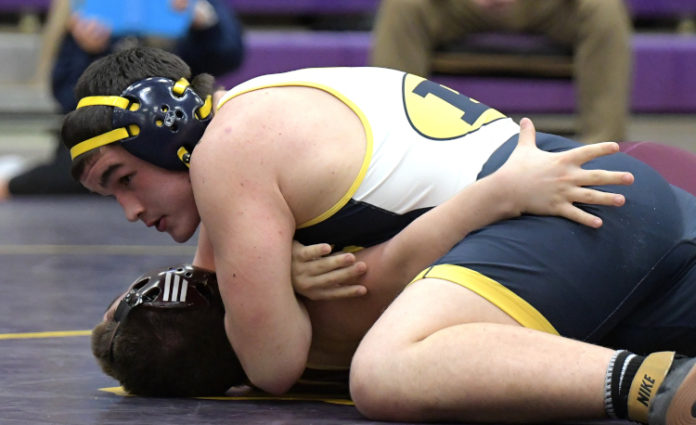 BURTON—Will Davidson and Anthony Gencarelli both won individual titles and four other Kirtland wrestlers finished among the top four at the Division III Berkshire Sectional on Saturday.

That group of Hornets will compete in next weekend’s Division III District at Garfield Heights.

Davidson, a junior, pinned Berkshire’s Justin Heiden in the 120-pound championship in what could have been the championship bout in the Chagrin Valley Conference tournament had Kirtland not been quarantined.

“I was very disappointed to not be able to wrestle at the CVC but it’s a very unusual wrestling season,” Davidson said. “I was excited to take on Heiden in the finals at sectionals.”

Davidson used a technical fall and a pin to reach the finals.

He used a double-leg takedown and finished Heiden off using a turk at the 5:44 mark.

With a sectional title in tow, Davidson, who improved to 21-3 on the year, will open the district tournament against Wellington sophomore Wayde Bowman (7-6).

“It was awesome being able to kick off the postseason with a sectionals title,” Davidson said. “I didn’t get much wrestling in this year and was very happy to be able to compete.”

He pinned his first opponents in 19 and 56 seconds respectively to set up the championship bout with Perrin, who also won a CVC title.

With his win, Gencarelli earned a No. 1 seed at the district tournament. He’ll wrestle Norwayne senior Gavin Grier (9-7) in the first round.

Sophomore Louka Babic placed second at 160 after using a pin and a 4-1 decision to reach the finals round. He lost to Jefferson senior Colton Edgard in the championship bout.

Babic, who improved to 19-6, will wrestle Mogadore freshman Austin Constantine (16-9) in the first round at the district tournament.

Freshman Daniel Bak and junior Brennon Braud finished third at 106 and 182, respectively, and freshman Drew Duncan placed fourth at 126 pounds. Gaetano Savelli was fifth at 138 and will be a district alternate.

Bak, who is 8-7, will wrestle South Range sophomore Hunter Newell (30-9) in the district opener. Braud, who improved to 19-5, matched up with Black River sophomore Charlie Wells (17-2) in the district preliminary round. Duncan drew top-seeded Damien Skelly of Smithville in the first round at districts. Skelly, a senior, is 3-0.