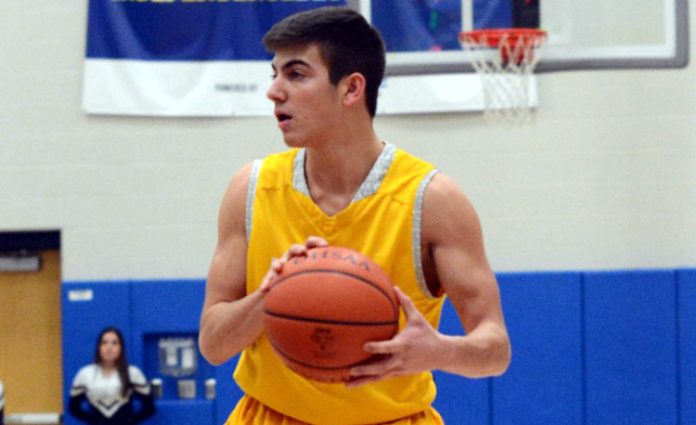 Hornets shake off the rust at Kenston

Kirtland’s season opener didn’t go quite as planned as the Hornets fell to host Kenston on Tuesday, 58-46.

Despite the setback, head coach Shawn McGregor and the Hornets were thrilled to hit the court.

“Our kids were chomping at the bit to play somebody besides themselves,” McGregor said. “They were excited and it was a lot of fun. The game didn’t go exactly how we wanted it to, but they played hard and did the things we wanted them to do. It was just good to be out there to compete.”

The Hornets found themselves in uncharted territory when they turned the ball over 13 times in the first half.

Kenston took advantage of those miscues and turned them into transition baskets that helped the Bombers build a 33-21 halftime lead.

“We had a lot of unforced turnovers,” McGregor said. “We had the first-game jitters a little bit. We had 13 turnovers in the first half, which is super uncharacteristic of our guys and we got beat in transition a little bit. Kenston played hard and knocked down some shots. We were just getting used to the speed of the game. It’s a little different from doing skill work and playing against each other for a while to go out and play against someone of Kenston’s caliber but I was proud of the effort.”

The Bombers extended their lead to 48-28 after three quarters.

Kirtland finally got something going in the fourth quarter as seven different players scored in the frame.

“They’re great competitors,” McGregor said of his leading scorers. “We’ve got better days coming ahead, no doubt about it. We got some rust worked off today against a really good team. I’m happy with that. We’re going to realize on those guys to get us to where we need to be.”

Kirtland travels to Hawken on Dec. 29 and then hosts Lutheran West on Dec. 30.

Kirtland rides second half surge to win over Berkshire