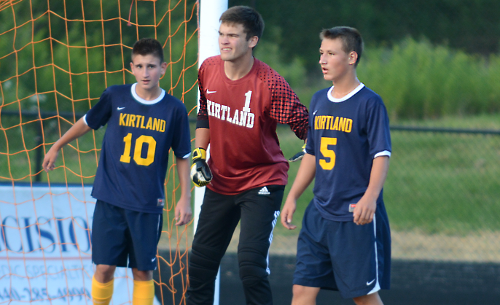 Jordan Ianiro, Luke Sabbath and Jared Ianiro scored goals to lead Kirtland to a 3-0 win over Brooklyn on Thursday in the Hornets’ final tune-up for Tuesday’s Chagrin Valley Conference showdown with Beachwood.

It was the sixth straight win for the Hornets, who improved to 8-1-3.

Jordan Ianiro gave the Hornets a 1-0 halftime lead when he took a pass from Brad Hauptman and beat the Brooklyn goalie to the net.

“It was a breakaway,” Valentic said. “We defended a set piece and Brad Hauptman gave him a perfect pass. It was one-on-one with the goalie and he took it home.”

Sabbath made it 2-0 early in the second half and Jared Ianiro closed out the scoring for the Hornets.

“Jared’s was off a throw in,” Valentic said. “He dribbled around two players and hit a left-footed shot around the keeper that I don’t think the keeper even saw.”

Tommy Loncar recorded just two saves in the game as the defense in front of him shut down the Brooklyn attack.

“They only had one shot on goal in the second half and that was in the last five minutes of the game,” Valentic said. “We were organized and smart on defense. We denied them any real chances.”

The Hornets host Beachwood on Tuesday in a game that could decide which team wins the league title. The Bison edged the Hornets for the title last season but Kirtland avenged the regular season loss with a win in the post-season.

“Beachwood is crucial for the conference,” Valentic said. “Everybody knows what’s at stake. I hope they’re ready for it.”