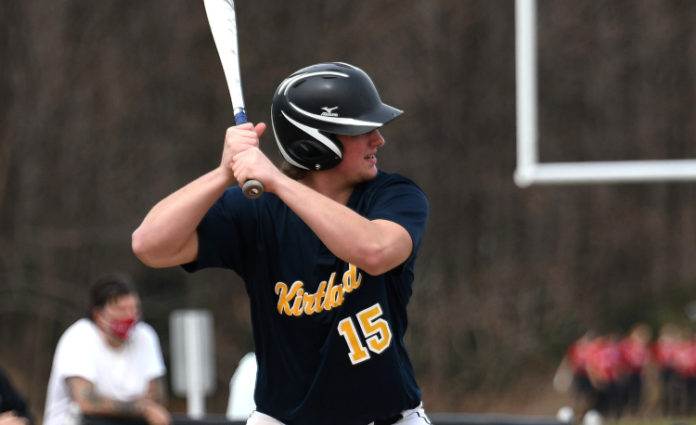 A short memory and clutch hitting helped Kirtland slip past visiting Villa Angela-St. Joseph in a non-conference game on Monday, 7-6.

The Vikings scored four runs in the top of the second on several Kirtland miscues but the Hornets bounced back in the bottom half of the inning with five runs and they added one more in the bottom of the sixth to pull out their fourth win of the season.

“We made some mistakes early but we recovered from those mistakes and bounced back right away,” said Kirtland coach Luke Smrdel. “They scored four in the second and we scored five. They made a few mistakes too but that’s what we have to do in games like that, we have to capitalize on their errors like they capitalized on ours.”

VASJ used a single and a Kirtland error to score an unearned run in the top of the first inning.

The Hornets responded with a run to tie the game in the bottom of the first.

Reese VanArnhem reached on an error and scored on Mason Sullivan’s one-out double.

The floodgates opened in the top of the second when the Hornets walked two batters and committed a pair of errors that left VASJ on top, 5-1.

That lead was short-lived as Kirtland’s bats came to life in the bottom of the second.

Adam Knaak led off with a single and Gage Sullivan and Mac Boyd hit back-to-back doubles with Boyd adding an RBI when Knaak scored to cut the VASJ lead to 5-2. Victor Alfieri then drew a walk to load the bases and Reese VanArnhem stayed hot with a two-RBI double. Anthony DeMarco hit a sacrifice fly to tie it Pierce Boyd singled home VanArnhem to give the Hornets a 6-5 lead.

“The bats were on fire,” Smrdel said. “We came out sticking and we kept hitting the ball hard all day. We had a lot of ‘at ‘em’ balls too. Guys were getting out with hard-hit balls. It’s good to see the bats being alive this early in the season.”

A walk and a pair of singles allowed VASJ to tie the game in the third before both teams went scoreless until Kirtland scored the decisive run in the bottom of the sixth.

The Hornets stranded five baserunners during that stretch while the Vikings left the bases loaded in the fifth.

Mason Sullivan led off the Kirtland sixth with a single and moved to second on Pierce Boyd’s base hit. Jonathan Withrow then singled home what would be the game-winning run.

“My approach was the same as always,” Withrow said of the clutch at bat. “I try to attack on an early fastball. I got one that I liked and put a good swing on the ball and it landed through the hole.”

“It was very important for us to come back with a big inning,” Withrow said of Kirtland’s early success hitting the ball. “Coach came out and told us we have to dig ourselves out of the hole and our guys just brought out the bats and came to play. I was happy to get the hit and I look forward to helping out the team in every way that I can.”

VanArnhem and Mason Sullivan also had two hits on the day.

“The big thing our pitchers have to do is they have to ahead of batters,” Smrdel said. “We got behind in counts too much early. We have to work ahead and if we don’t do that, that’s when our pitch count goes up and when we get in trouble. The pitching was efficient but at the same time, we have to work on it.”

Kirtland, who improved to 4-2, travels to Cardinal on Tuesday.