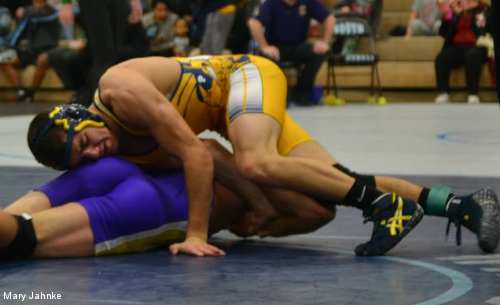 After winning the Disney Duals in Florida over Christmas Break the Kirtland wrestling team returned to local competition on Saturday. The Hornets split a tri-match at Perry.

Kirtland defeated Grand Valley, 48-21, then dropped a 52-18 decision to the host Pirates.

“Overall, we were a little rusty,” said Kirtland coach Scott Francis. “We hadn’t wrestled in like a week and a half but going into the second match we definitely looked better. We have been getting some good practices in. A good practice is effectively like wrestling a live match.”

“Brendan did a real nice job in a close match against Perry,” Francis said. “He was down in the match and came back and won the third period. That’s one of the things we’ve discussed with the guys all year, winning that third period. He did that and won the match.”

“He’s really starting to come around here really quick,” Francis said. “You can see he has a lot of ability. When he starts believing in himself he’s going to be a really, really tough wrestler.”

Francis pinned his Grand Valley opponent in just 27 seconds then avenged a loss to Perry’s Geoffrey Gedeon with a 12-5 decision at 138. Gedeon beat Francis at the Rebel Invitational last month.

“He felt after a couple of weeks of practice he’d be a little bit better of wrestling and I think that’s shown,” Coach Francis said. “He’s had a few weeks to get into now. He had a better third period against the kid than he did last time.”

Davidson also recorded a pin against Grand Valley then pulled out a 4-1 decision over Perry’s Evan Schenk in a battle of two of the area’s top 160 pounders.

“Every time he’s wrestled Schenk it’s been a real close match,” Francis said. “It’s a good match between those two. It is two good wrestlers going at it. They’ll see each other again at the CVC tournament. It’s always an exciting match when he goes up against Evan.”

Sakenes continues to impress in his first year of high school wrestling. He pinned his Grand Valley opponent in 18 seconds then pulled out a triple overtime win against Perry’s John Miller at 170.

The match against Miller was tied 3-3 after regulation. Neither wrestler scored in the first overtime but Sakenes, who chose down to start the second extra period, earned an escape then rode out Miller in the final 30 seconds of the match to win, 4-3.

“He made up for the quick pin in the second match. He got his mat time in the second match,” Francis said. “He wasn’t looking forward to going into triple overtime but once you get into those overtimes and you’re a competitor like Chris is there’s no way you’re going to lose that match. When the first overtime started I had a good feeling he was going to pull that out because he just doesn’t like to lose.”