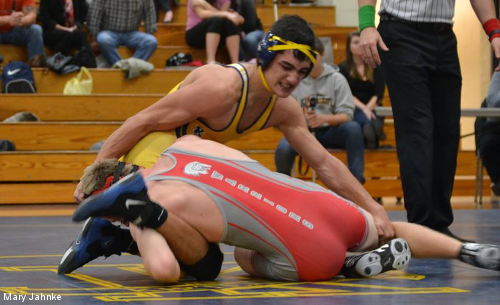 KIRTLAND—The Kirtland wrestling team turned in a strong performance in a season-opening double dual with University School and Ashtabula Edgewood on Thursday.

The Hornets knocked off the Preppers, 42-22, but couldn’t overcome 36 forfeit points in a 53-25 loss to Edgewood in the second dual.

“Overall, we’re pleased,” said Kirtland head coach Scott Francis. “Our guys were aggressive and probably at times overaggressive, which is easier to fix than it is to be under aggressive. That was a good sign right there.”

Francis also was pleased with what he saw out of his wrestlers late in their matches.

“They were always looking to score points,” he said. “Going into the third period, we’re stressing this year to win the third, and our guys were going out there and doing that. Even when they were getting winded because we haven’t been able to get in the good practices we want, you could see they were pushing themselves as hard as they could. Nobody was giving up out there.”

Williamson, a 106-pounder, won by forfeit against University School then scored a 19-6 major decision over Edgewood’s Andrew Hull.

“Brendan looked really nice out there,” Francis said. “Last year he really changed the way he was finishing the singles. He’s continuing that and letting his style evolved. We’re really hoping to see big things from him.”

“He went out there and wrestled a smart match,” Francis said. “He wrestled a little bit of varsity for us last year but he’s one that we saw some good things from him. I’m hoping we can get him a spot in the lineup this year. He’s in a tough spot in our lineup right now.”

Calvert and Francis both pinned their two opponents. Calvert wrestled 132 while Francis competed at 138 against University School and bumped up to 145 against Edgewood.

“Mike looked tough. He’s one of the guys we’re counting on this year. I think he had a good start to his season. He’s been practicing non-stop year-round and has been in the room. He’s one of the few guys we’ve had here since November. He had more conditioning than some of our guys just coming in,” Francis said. “Evan looked good out there as well. He was one of the guys that was probably just a little bit overaggressive. He needs to take it down probably a half notch and let those guys come to him. I’d rather see our guys going out there overaggressive than not aggressive enough.”

Mike Petterson made his Kirtland debut on Thursday after transferring from Avon Lake. He wrestled 106 last season but never cracked 100 pounds. On Wednesday, he weighed in at 112.3 pounds and pinned his opponent from University School then bumped up to 120 against Edgewood. He lost by technical fall in that match.

“The one match where he wrestled at 113 he looked good and we bumped him up to wrestle at 120 and he looked like he was an undersized 120,” Francis said. “Still, he went out there and wrestled well in both matches.”

Daniel Jahnke’s off-season training showed on Wednesday as he finished 1-1 with a pin over his University School opponent.

“He just started wrestling last year,” Francis said. “He put in a lot of time in the off-season lifting and we took him over to Solon (open mats) a lot. He got to wrestle some real good kids over there. As we were going to Solon we could see every week he was really improving. Out on the mat tonight you could see that extra time he put in really helped.”

Chris Brown and Chris Sakenes both finished 1-1 for the Hornets.

Brown lost to University School’s Mason Monahan at 152 then came back to pin Edgewood’s Frankie Dunken in his second bout.

“He was a little bit sluggish in the first match making weight for the first time,” Francis said. “In between matches he got some fuel in him and he went out there with more of a relaxed attitude and it really worked to his benefit. He can wrestle a little bit tense at times. When he goes out there relaxed he’s very strong and when he uses that to his advantage like he should he does very well.”

Sakenes is in his first year wrestling with the Hornets and his inexperience played a role in his loss to Edgewood’s David Ellis at 160. After taking a forfeit against University School, Sakenes went toe-to-toe with Ellis until he ran out of gas and was pinned.

“He’s had a little bit of wrestling background and you can see that,” Francis said. “He had that nice high crotch he was coming in on and coming up to finish that. We’ll take that and work off that and make that a little bit better for him and give him a couple other moves to link together with that.”

Sakenes, who wrestled in junior high, has rapidly improved and Francis is confident he’ll get better as the season progresses.

“He learned a lot that match,” Francis said. “We told him he did some things that shouldn’t have worked and it did but then he did some things that should have worked and they didn’t. That’s the hardest thing to teach a kid is how to get in a good situation. When they do it naturally it makes it so easy to teach him how to go from there. We told him you wrestle that kid in another week there’s a great chance you beat him. In the first period he was looking great then you can see when he hit that wall, you saw it in his face. He was just going to do the best he can to hang on.”