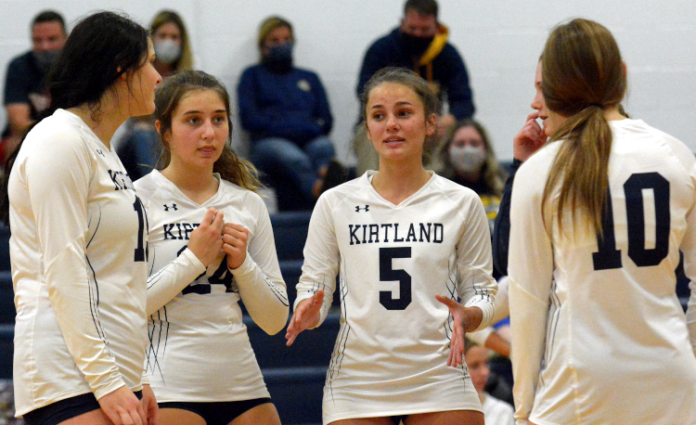 Kirtland extended its winning streak to four matches with a 3-0 sweep of visiting Cuyahoga Heights on Tuesday.

“We did everything well,” Kirtland coach Arlayna Newcomer said. “Both offense and defense were on point and we got the job done.”

Georgia DeJohn and Natalie Glowe took control of the net, which allowed the Hornets to keep Cuyahoga Heights from mounting much of an attack.

“My outsides, Georgia and Natalie, did a good job at taking advantage of the situation tonight,” Newcomer said. “They saw an opportunity to dominate offensively and executed well.”

With the win, Kirtland improved to 11-4 overall and 5-1 in the Chagrin Valley Conference Valley Division.

The Hornets have lost to Division I programs Mentor and North and Division II Trinity. Their only Division III loss was to Cardinal on Sept. 9.

Kirtland travels to Cardinal on Thursday in a game that could move the Hornets to the top of the standings in the division.

Due to COVID, the CVC will not recognize conference champions this fall but the Hornets are approaching this match as if that title is on the line.

“We’re still going into the game on Thursday like we’re playing for another conference title,” Newcomer said. “We have a lot more to prove this season and fighting for the win on Thursday is just the beginning.”