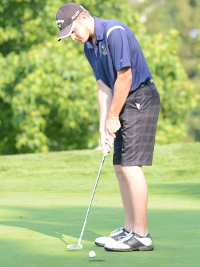 Aside from Kirtland’s Michael Schnur shooting even par to win medalist honors and Brian Beres carding a 40 to lead the Hornets to a 160-172 win over Berkshire at St. Denis Golf Club on Monday, Michael Knezevic and Corey Sceranka shot career bests in the win.

“I’m always really proud of my guys but they really stepped up today,” said Kirtland coach Greg Cosimi. “Corey and Michael Knezevic shot the best rounds of their Kirtland golf careers. Corey shot 43 and Michael shot a 44. We all jelled today.”

The win was a big one as the Hornets attempt to win their first outright Chagrin Valley Conference title since 2011. With wins over Wickliffe and Cardinal next week, the Hornets would be in position to do just that with a strong performance at the CVC post-season tournament.

Winners of the regular season schedule earn 50-percent of the points needed to win the league title. The other 50-percent is split between the pre-season and post-season tournaments.

“We are so excited now to be in a good position going into that tournament,” Cosimi said.

Schnur was on fire even with a double bogey.

“He shot par on the back nine at St. Denis with a double bogey,” Cosimi said. “That’s something that maybe a senior can do and he’s a freshman doing it.”

Beres, Michael Johnson (41) and Sceranka rounded out the Hornets’ scorecard. Daniel Heimsoth shot a 46 for the Hornets.

“The kids were playing within themselves,” Cosimi said. “Before the round we talked about not making big mistakes. I didn’t see mistakes at all. I just saw awesome golf.”

Nick Paul led Berkshire with a 38 and Sam Fisher finished with a 39. Luke Byler (42) and Jarrett Smetana (53) also scored for the Badgers.

“Hats off to coach (Dave) List and Berkshire,” Cosimi said. “Even though we won, they played a tough match. Nick Paul shot a 38 and they also had a 39. Those are two really good scores.”

The Hornets play Wickliffe on Tuesday and Cardinal on Thursday.