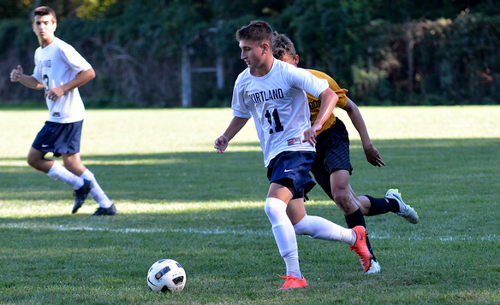 Kirtland junior Adam Scerenka stepped up in a big way for the Kirtland Hornets in a 5-4 win at Brooklyn on Tuesday.

Scerenka replaced starting goalkeeper Danny Jahnke, who suffered a minor injury at practice on Monday, and made several key saves to help the Hornets improve to 12-3 on the year.

“He made two huge saves that were obviously the difference,” said Kirtland coach John Valentic. “He came up and did what he needed to do. Some of the other ones were scrappy in front of the net but they hit three really good shots.”

Stjepan Mijic-Barisic scored two goals for the Hornets while Jared Ianiro, Sanjay Sundararajan and Bradley Hauptman each scored once.

“Brooklyn has one player that is probably the best player we’ve played all year. He’s a special talent. He scored two and assisted on two and just gave us fits all game long,” Valentic said. “We moved the ball great. We possessed and attacked. They bunkered and then countered with that No. 10 kid, so we were a little bit vulnerable. It was just one of those games.”

The game could have turned out differently had it not been for the defensive effort of Kirtland’s Caleb Cardon.

“Defensively, he did a nice job,” Valentic said. “He made it difficult for their star player. It could have been worse if Caleb wasn’t guarding him.”

Hauptman’s goal was his 13th of the season and a good sign for the Hornets heading into the post-season. He had been slowed by a leg injury but it appears that is behind him.

“He’s looking good,” Valentic said. “He’s taking guys on. He’s going at people with a lot of confidence. He’s dangerous. He’s got speed and a ton of skill. He’s going to make some people play on their heels a little bit.”

Hauptman assisted on three goals and Jeremy Lunka and Ante Bevanda both had one assist.

Kirtland closes out the regular season at Columbia on Thursday.