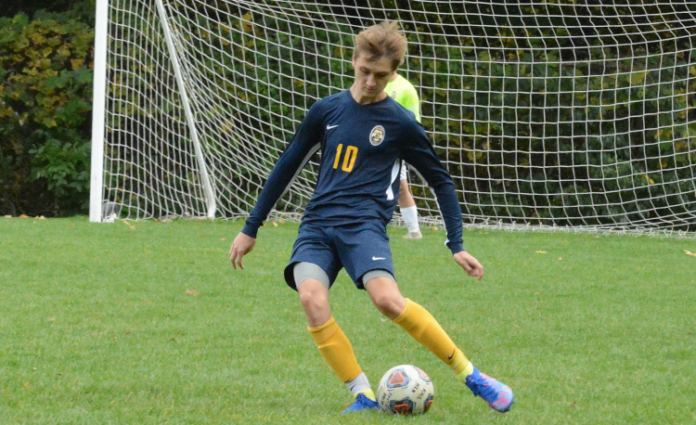 Kirtland jumped out to an early lead but was forced to fight off Wickliffe throughout the rest of the match.

The Hornets settled for a 4-2 win to improve to 9-3-1 overall. Kirtland needs just one more win this season—either in the regular-season finale against Lake Catholic or in the postseason—to reach double-digit wins for the 12th straight year.

“It was a bit of an uneven performance,” Kirtland coach John Valentic said. “There were definitely times where we looked really good and doing what we liked to do and how we practice and then there were times when it wasn’t clicking. Overall, you have to be happy with the victory. We got a lot of guys some minutes too.”

Evan Dures scored just two minutes into the game to give the Hornets their first lead.

“That was huge,” Valentic said. “It definitely alleviated some pressure and tension, especially for him since he’s been battling some injuries so for him to get a goal will boost his confidence. Once you get that first goal and you’re setting the pace of the game, it definitely sets the pace for the rest of the game.”

Wickliffe’s Shane Williams scored the equalizer midway through the first half but the Hornets responded with goals from Nico Podojil-Schlesinger and John Raguz to retake the lead at 3-1 heading into the break.

Williams made it interesting with his second goal of the night midway through the second half but Podojil-Schlesinger scored again less than a minute later to make it 4-2.

The Hornets held off the Blue Devils the rest of the way.

“We controlled the game but Wickliffe does a nice job,” Valentic said. “They tried to make it uncomfortable for us and they didn’t give us a lot of time and room so the game was much closer than we would have liked.”

Kirtland will enter the postseason with three players who have scored double-digit goals and fourth with nine.

The Hornets also have several players who have racked up the assists this season, leaving opponents with the difficult task of defending a wide range of shooters rather than focusing on one or two.