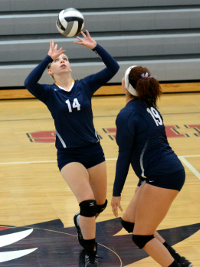 With a 3-0 sweep at Berkshire on Tuesday, Kirtland’s volleyball team stayed in the hunt to win the Chagrin Valley Conference Valley Division title.

“We were happy with everybody’s performance,” said Kirtland coach Bob Schenosky. “As a team, they did an excellent job. We’re starting to put it all together.”

After outlasting the Badgers in the first two games, the Hornets’ offense dominated the third.

“The first two were close,” Schenosky said. “I thought the last game we hit exceptionally well. We were picking up the tips well and our serving today was probably the best I’ve seen all season.”

Taylor Frazee, who was promoted from the junior varsity squad early in the season, had five kills, nine digs and 12 service points.

“I’ll tell you what, she was a JV captain, coming up to varsity she’s one of the players I play all the way around,” Schenosky said. “I can count on her in the back row. She does a nice job in the front row and she had a couple nice shots down the line today. I can count on her serving too. She’s become one of my best all-around players.”

Sam Bailey, another player moved up from the JV, contributed with five assists and eight service points.

Sarah Steigerwald made sure the Kirtland attackers got their share of balls.

“Sarah is one of our two setters and she had 11 assists today,” Schenosky said. “She’s done a great job. She moved it around very well tonight. We weren’t focused on our middle. The left side, the outside hitters had a lot of opportunities and the right side did as well tonight. It was nice to see the ball movement with all three, which helps keep the block honest.”