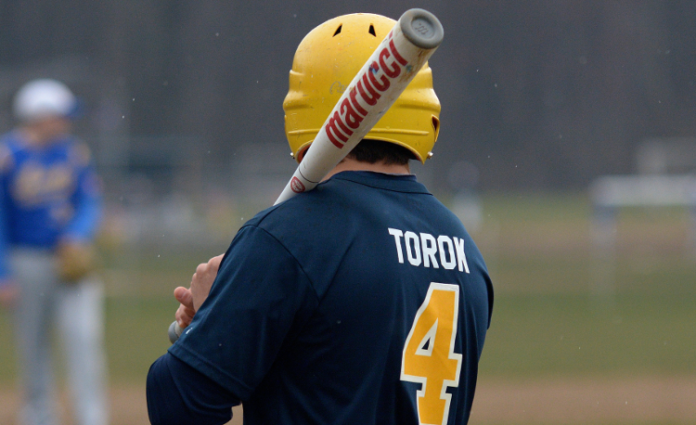 Good things come in threes, at least they did in Kirtland’s 15-5 five-inning win over visiting Maple Heights on Thursday.

“It’s very easy to lose confidence after losing two tough games in a row and after (Wednesday’s) loss, we talked about how important it was to try to get wins today and tomorrow and heading into conference play Monday,” Kirtland coach Luke Smrdel said. “The boys came out ready to play. We jumped on them early and kept the pressure on them each inning with our bats and speed.”

Kirtland’s first four batters reached safely and three of them scored to give the Hornets a 3-0 lead after the first.

The Mustangs got one run back in the second but the Hornets scored three more in the bottom half of the inning on three hits and a walk.

Pitching struggles and a couple of errors helped Maple Heights add a run in the third and two in the fourth but Kirtland consistently put three runs on the board in the bottom half of those innings to keep pulling away from the Mustangs.

Sullivan led the Kirtland offense with three hits—all doubles—and he also knocked in a run. It was a strong performance at the plate following a great pitching performance the day before in a 4-3 setback to Benedictine.

“Before I go up to bat, I try to time the batter up and find out his pitches and when I’m in the batter’s box I just try to hit it my hardest but also try to not swing to hard,” Sullivan said of his approach at the plate. “This season is going to turn out better than expected because I never knew I was going to be in the top rotation for pitching and I’ve been practicing pretty hard to become a better baseball player all-around.”

Joey Torok, Joey Mongelluzzi and Nick Ribic each added two hits for the Hornets and Ribic led the way with three RBI. Torok, Mongelluzzi and Jack Dever each batted in two runs.

“Joey, Joey, and Nick all had fantastic days,” Smrdel said. “Logan Potosky got his first career varsity hit and RBI today, which was very exciting to see too.”

Maple Heights made the Hornets earn the victory. The Mustangs pitchers challenged the Kirtland hitters and the Kirtland pitchers didn’t have an easy out in the lineup.

“Those guys have made huge strides in the last two years,” Smrdel said of the Mustangs. “They’re well-coached, they’re very competitive, and they play hard. Coach (Lee) Harris has done an incredible job with that program.”

Kirtland travels to Perry on Friday.

Hornets inspired by those who paved the way