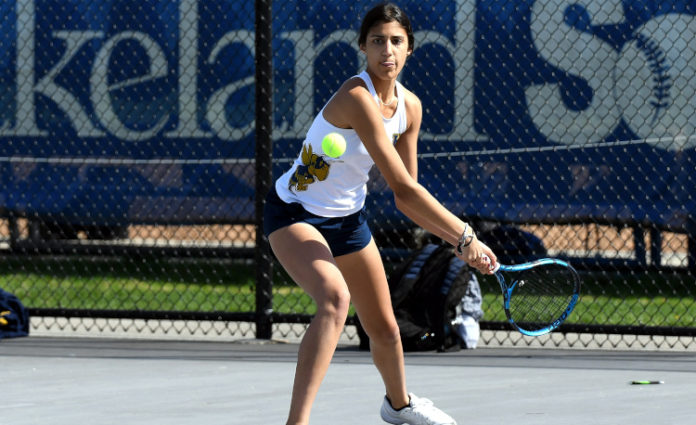 KIRTLAND—Kirtland’s tennis team improved to 2-3 on the year with a 4-1 win over visiting North at Lakeland Community College on Tuesday.

Winning for the Hornets were Nisha Makkar at first singles, Aaron Shultz at second singles, and the doubles teams of Anthony Mancini and Alex Loncar and T.J. Green and Bella Schultz.

“Today, the key to my win was slowing down and not getting ahead of myself, which is something I’ve been consciously working on in preparation for this season,” Makkar said. “I stayed patient and took my time during and in between each point and I really saw it pay off in my consistency and serve.”

As a girl playing first singles in boys’ tennis, Makkar deals with some additional stress before matches, but so far, she’s held her own and enjoys the challenge.

“I definitely get a little intimidated looking at some of the competition, which is stressful before a match,” she said. “Usually, I shake this off during warmups by just reminding myself that I have worked hard to be where I am and am just as deserving of my position as my opponent is. I am also very competitive so it’s fun to see my opponents’ reactions when they don’t expect to be beaten by a girl.”

“Aaron hit some really nice passing shots in his win,” said Kirtland coach Bob Lasecki. “He made great adjustments during the match. His opponent was really good at the net.”

Mancini and Loncar teamed up to win at first doubles against North’s Ryan Bechtel and Josh Dill, 6-2, 6-4. Mancini is now 4-1 while Loncar improved to 2-2.

“Anthony and Alex played at first doubles for the first time and did not miss a beat,” Lasecki said. “Alex’s serve was working well.”

Green and Schultz won at second doubles over North’s Floyd Lomis and Akshat Shah, 6-3, 6-4. Green is now 2-3 while Schultz improved to 4-1.

“T.J. and Bella played well together,” Lasecki said. “Bell is consistent in going to 4-1.”

“Liz had another long match losing in a third-set tie-breaker,” Lasecki said. “She has had back-to-back tie-breakers. She is getting stronger and stronger.”

The Hornets return to action on Wednesday against Wickliffe.