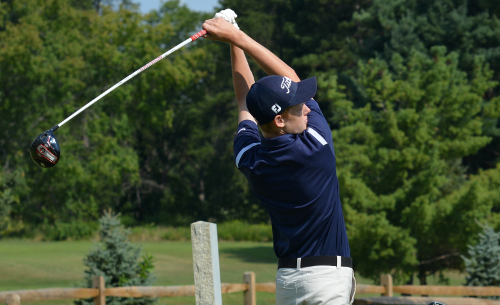 MIDDLEFIELD—For some, a second place finish could be a disappointment.

That wasn’t the case for Kirtland golf coach Greg Cosimi who watched his team come together to score 330 at Friday’s Cardinal Invitational at Grandview Golf Course, one stroke behind tournament champion Berkshire.

The score was good enough to avenge early season losses to Hawken and Perry.

“I was very proud of all of our golfers today,” Cosimi said. “They really pulled it together and had an excellent showing. There was an infectious excitement out on the course as the guys knew that they were all playing well. Our score of 330 was not only good enough to earn us second place in the tournament, but it is a confidence builder as we look to the rest of the season.”

"Michael Schnur played very well for 17 holes then he tripled 18,” Cosimi said. “I think the second place finish is bittersweet for Michael because he was very close to earning medalist honors. Still, this week has been a great one for Michael.”

Brian Beres really stepped up his game to finish with an 82, good for sixth place overall.

“Our strong finish is in large part due to the play of Brian Beres,” Cosimi said. “Brian really came through for us at Cardinal. His 82 tied for sixth place in the 60-golfer Invitational. Brian has been a solid contributor in almost every match since making the varsity team in his sophomore year and he has worked very hard in that time to improve. I am so happy to see all of his hard work paying off.”

Michael Knezevic carded an 84, Adam Mueller shot 88, Daniel Heimsoth finished with a 91 and Jack Dever shot 108 for the Hornets.