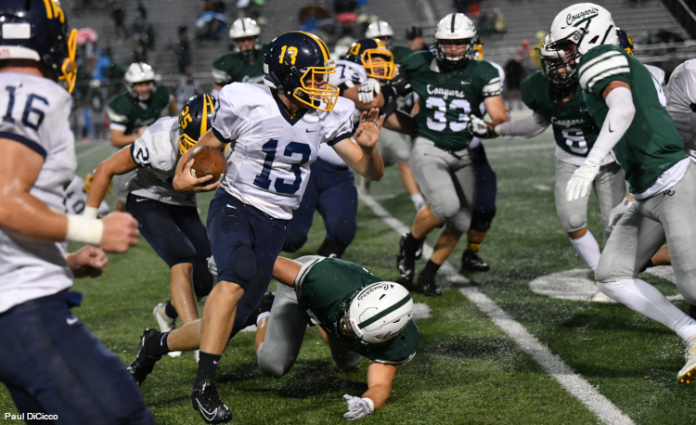 Lake Catholic’s bid to become the first team to beat Kirtland in a Week 1 contest since 2009 never really had much of a chance as the Hornets opened the Coronavirus shortened season with a dominating 31-15 win.

The win was the 11th straight for the Hornets on opening night.

“Besides the opening turnover on a dropped punt, I don’t have anything too bad to say about the kids,” said Kirtland coach Tiger LaVerde. “I think they played hard, they executed when they had to, and defensively they did a nice job.”

The Hornets did get off a rocky start as they punted on their opening possession of the game but quickly found their footing on their second possession, which ended with a 26-yard Mario Rodin field goal and a 3-0 lead with 19 seconds left in the opening quarter.

Kirtland went on to score touchdowns on its next two offensive possessions to close out the first half with a 17-0 lead.

The first came on a Mason Sullivan one-yard run and Nick Schwartz plunged in from two yards out.

Any chance the host Cougars had to climb back into the game evaporated on Kirtland’s first drive of the second half.

The Hornets put together a 14-play, 80-drive that ended with quarterback Liam Powers scoring from 16 yards out to push the Kirtland lead to 24-0.

Powers finished the day 4-of-8 passing for 79 yards and he ran for 92 yards on 11 carries with two scores.

“It felt great to finally get back out on the field with my team especially after a long period of time where we weren’t allowed to see each other,” Powers said. “Beating a team so close to Kirtland means a lot to us, let alone a storied program like Lake Catholic.”

Powers closed out the Kirtland scoring with a six-yard run early in the fourth quarter.

While the Cougars scored 15 points, the most of any Kirtland Week 1 opponent since Geneva beat the Hornets, 32-23, back in 2009, Kirtland dominated every other aspect of the game.

Kirtland outgained Lake Catholic, 355-186, and possessed the football for 30 minutes compared to just 17 for the Cougars.

The Hornets also recorded 24 first downs to just 10 for the Cougars.

Led by Mason Sullivan’s 105 yards on 22 carries, Kirtland picked up 276 yards on the ground while holding the Cougars to just 88.

“I wouldn’t say it was expected, but when you work as hard as all of my teammates do in the offseason, you always believe the outcome will be good,” Powers said.