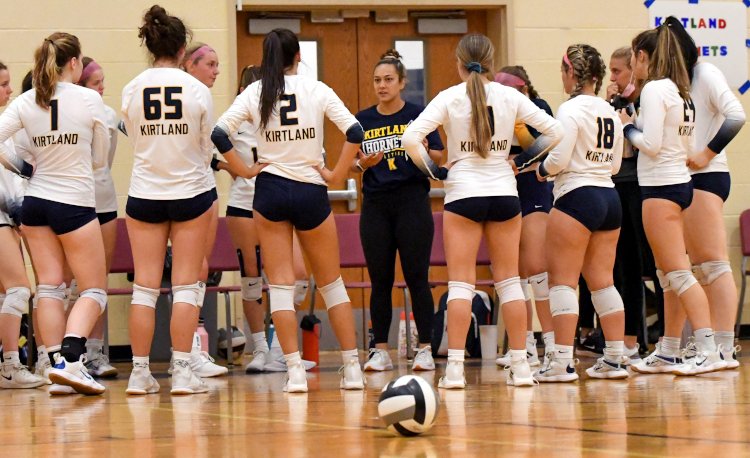 Kirtland’s volleyball team had every reason to come out flat in a non-conference match at Geneva on Thursday.

The Hornets won an intense match against league rival Cardinal on Monday and then swept Richmond Heights on Tuesday and beat Perry on Wednesday in a showdown of Chagrin Valley Conference division champions.

Playing their fourth match in as many days, the Hornets instead maintained their high level of play and beat the Eagles in three sets, 25-12, 25-9, 25-15.

“We knew having four matches in four days would be tough but we’re always up for a challenge,” said Kirtland coach Arlayna Newcomer. “The key to winning tonight was playing consistent from point 1 to point 25 of each set.”

With the win, Kirtland improved to 7-1 with seven straight wins after a season-opening loss at Independence on Aug. 24.

“The key to success is a simple answer: play as a team and not six individual people on the court and to just work hard,” said Kirtland junior Natalie Glowe, who recorded 12 kills and four aces in the win. “When our team is connecting after every point and communicating on the court and sideline we are unstoppable.”

Glowe dominated at the net, both in putting the ball down and blocking Geneva’s attack.

“I work as hard as I can every point and I try to find the holes in the block and defense, and when I see something is open I go for it and let my other teammates know that that spot is open and they are able to score in that area,” Glowe said. “The key is to always work hard and work together.”

Katie Reynolds recorded 15 assists in the win and Ava Golem led the Hornets with 20 digs.

While many teams may struggle to win four matches in four days, Glowe believes the Hornets thrive on such a challenge.

“We work hard in the gym every day and condition when we can,” she said. “During practice, we work on game situations and play through when we might be feeling a bit tired and that prepares us for our longer matches and playing to our full potential in general. The hard drills we do in practice that make me tired in the moment pull together and keep me ready and playing throughout the whole game.”

Kirtland closes out its busy week on Saturday at Kenston.

January 13, 2022
The OHSAA announced on Thursday its intentions to add girls wrestling and boys volleyball beginning with the 2022-23 school year.