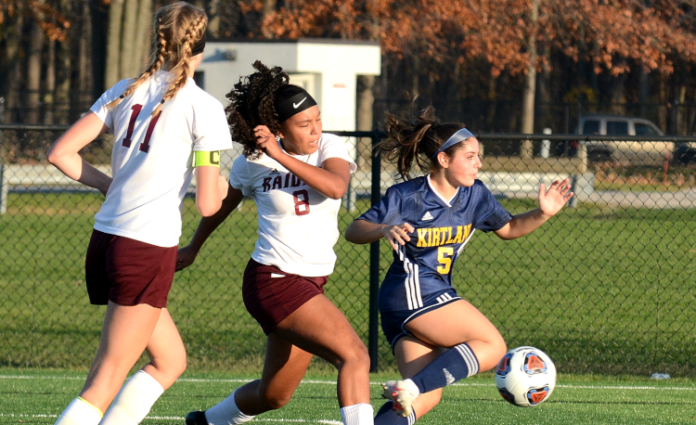 Hornets light up the course at Riverside

Head coach Ed Bradac and the Hornets are thrilled to play in the state Final Four for the fourth straight time, and fifth time in six years, but he also hopes his players take a moment to reflect upon what they already have achieved.

“It’s not easy,” Bradac said. “I don’t want to ever take it for granted and we’ve talked about it as a team. Past players and other programs would change places with us in a heartbeat, so for me, I never want to take this moment for granted. I want to enjoy it, I want to appreciate what we’ve been able to accomplish over these past six years because in five of the last six we’ve advanced to this point, so it’s exciting for our program and for not just our players here, but I teach at the middle school, so I know the middle school kids are excited and that’s the small community feel.”

The Hornets, who improved to 17-1-3, weren’t all that neighborly in building a 4-0 halftime advantage.

Kirtland took 18 shots in the first 40 minutes while South Range didn’t get a good look at the net. That wasn’t something the Raiders were accustomed to as they entered the game with 98 goals on the year, one more than the Hornets had scored.

South Range’s Gabby Lamparty entered the game with a team-high 31 goals while Bree Kohler had scored 27 before Saturday. Kirtland focused on shutting down South Range’s top two scorers and that strategy paid off.

“For us, we play a schedule that is predominantly Division I and II teams,” Bradac said. “We don’t play a lot of Division III schools, so once we get into the tournament, I think we’re seasoned for this environment. We knew Bree and we knew Gabby coming in. We said, ‘Look, we need to know where 13 and 25 are at all times and we’ll work from there.’ That was our goal.”

Speaking of goals, Erika Zschuppe scored the first of her three with 32:35 left in the first half. She added another nine minutes later then assisted on a Leah LaVerde goal that pushed Kirtland’s lead to 3-0.

Zschuppe now has 50 goals and 11 assists on the year.

“She’s taken it upon herself knowing that the further we move through the tournament, that more and more attention will be paid to her,” Bradac said. “She’s very mindful of getting other teammates involved. She’s doing a great job. Her assists totals are going up in addition to her goal-scoring.”

LaVerde added her second goal with seven minutes left in the first half.

Kohler scored seven minutes into the second half to prevent the Kirtland shutout but Reilly Greenlee, who placed 84th at the state cross country meet earlier in the morning, responded with her fifth goal of the year and Zschuppe closed out the scoring with 15:34 remaining in the game.

Aria Evans-Roskos pitched in with a pair of assists and Corinne Aquila and Mia Rini each finished the day with one. Aquila also recorded three saves in goal.

Kirtland’s senior class, which already this season had become the winningest in program history, improved to 67-14-6 during its four-year run.

The Hornets advanced to the state semifinals against Liberty-Benton on Tuesday at Avon High School, where they’ll try to avenge a 2-1 loss to the Eagles in last year’s state semifinals.

“We respect their program and I know they respect our program,” Bradac said. “Their coach, we communicated during the season, so I’m excited to go and play them again just like I’m sure they’re excited to come and play us.”