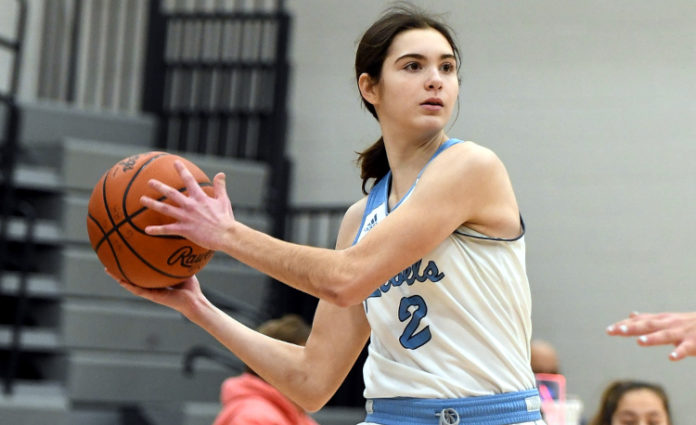 A 16-0 first-quarter run provided the South Rebels with the momentum they needed to knock off Western Reserve Conference rival Madison on Saturday, 51-44.

The Rebels, who improved to 2-5 on the year after winning their second straight game, relied on their defense to slow down the dangerous Blue Streaks.

“We played really good defense today and that was the key,” said South coach Mike Coreno. “We were in a zone and what we did was we just stepped out and we tried to run them off the 3-point line, or we just matched up with them.”

Kailey Minch and Emma Woolnough both drained first-quarter 3-pointers and three others Rebels scored in the first eight minutes as South jumped out to a 16-0 lead.

South’s defense challenged Madison’s shooters throughout the quarter but Madison had its chances early.

“They took a couple of shots that didn’t fall and, to me, when you shut a team down, it’s not always defense,” Coreno said. “They missed a couple of shots but the thing was we rebounded. We struggled to rebound against Riverside and that’s the key. We didn’t give them any second chances or any opportunities for little putbacks and we shot the ball well in that first quarter.”

Led by Alyssa Lavdis, Madison rallied back in the second quarter and cut its deficit to 25-17 going into the locker room. Lavdis scored seven of her 11 in that rally.

Madison edged South in the third quarter, 13-10, but the Rebels still led heading into the fourth, 35-30.

The Rebels hit 8-of-9 free throws in the final frame and Molly McGlaughlin scored six of her eight points in the quarter, which allowed the Rebels to hold off the Blue Streaks.

Kailey Minch scored a game-high 19 points to lead South on the offensive end. Jada Hopps and Emma Woolnough contributed to the win with eight and seven points, respectively.

Grace Woodcock finished with six points but her greatest contribution came on the defensive end in helping the Rebels to limit Madison standout Riley Montagner to just 11 points.

“Staying in the zone gave us a better opportunity against her,” Coreno said of Montagner. “She went from side to side and we just had a girl go play her. She’s a hard matchup if you go one-on-one because she’s so strong and if you go straight man you end up wearing one of your own players out. In the zone, any time she came off the baseline we had a forward match up with her. She only hit one 3 and had a couple of drives down the middle. She’s just strong and can get to the rim. We made sure we knew where she was the whole game and the kids did a good job. Grace Woodcock only scored six points but she had at least eight rebounds and Montagner was on her side of the floor a lot. Grace had a lot of deflections as they tried to force the ball to her. Grace was huge today.”

Woodcock is slowly finding her rhythm after a late start to the season.

On Saturday, she was focused on doing what she could to help the Rebels win and that meant playing tight defense on one of the league’s top players.

“Going into this game, we knew that a player like that is going to score no matter what,” she said. “So, I think my focus was to disrupt as much as I could and make her take uncomfortable shots. Our season definitely did not start the way we wanted and I think we definitely felt the effects of the late start, but we’ve been able to find a rhythm and remember how to play together, and I’m glad that it’s paying off. This last week has definitely been fun.”

South travels to North Royalton on Monday while Madison will look to bounce back on Wednesday at Riverside.