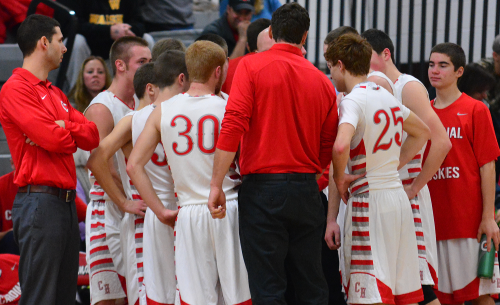 Cardinal rebounded from Saturday’s tough loss at Berkshire with a 60-45 win at Grand Valley on Tuesday.

The Huskies started strong and dominated the game to even their record at 2-2.

“We played a lot more physical,” said Cardinal coach Jon Cummins. “It was a nice to set a tone when we first came out. The kids were ready to play. It was the complete opposite of when we played at Berkshire when the kids weren’t ready to play. Maybe the big lights got to them. Here they played a lot harder and really set the tone from the beginning of the game.”

Cummins continued with his five in, five out rotation strategy but kept the first group on the floor longer than in the past. That move paid off as his starting five built an early 10 point lead and the Huskies never looked back.

“That seemed to work,” Cummins said. “We were pretty much in control the whole game. The kids played great.”

Thanks to their aggressive approach on the offensive end of the floor, 10 of the 11 players who saw action scored in the game.

“We did a lot better job of looking ahead and passing ahead. We had guys trying to get out in transition and we were able to get some easy buckets,” Cummins said. “Everyone played good. They weren’t looking at the scoreboard to see how many points they scored, they were looking to get the ball up the floor for some easy opportunities.”

Hunt was the fourth different Husky to lead the team in scoring this season.

“I think for different games different kids step up,” Cummins said. “They’re getting in a little better rhythm out there. I left the first group out a little longer and they were able to get into a flow out there. We pressed a little bit too and we ran a nice 2-3 zone that kept them away from the basket. They knocked down some threes but it didn’t hurt us much.”

Cardinal returns to action next Tuesday when the Huskies travel to Garrettsville Garfield.